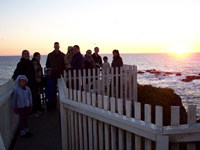 Muslims have spent two-thirds of the month of Ramadan in physical restraint and silent contemplation, and it is in the last third – the last ten days of Ramadan – where the remembrance of God approaches its peak. It is during this time that the practice of fasting and prayer is perfected, and the uninhibited communication between God and His servants takes place. This is the time for the most heartfelt prayers for forgiveness, for deep soul-searching, making amends to friends, and spending freely in charity.
One of the mysteries of this part of the month is Laylat al-Qadr, the Night of Power/Majesty/Destiny (translation varies), which is said to occur on one of the odd numbered days during the last third of the month. It is on this night — which the Qur’an says is better than 1,000 months — where sincere prayer wipes one’s sins clean. It is also during this period when it is encouraged to spend time in spiritual retreat (i’tikaf in Arabic), praying throughout the night.

A reliable hadith (saying of Prophet Muhammad) explains: “When the last one third of the night remains, our Lord, the Glorious One, descends towards the lower heaven and proclaims: ‘Is there anyone supplicating to Me so that I grant his supplication? Is there anyone begging of Me for anything so that I grant him his wish? Is there anyone who seeks My forgiveness so I forgive him?” Even with the difficulties of practicing Ramadan in America, it is hard to resist this clarion call, and a few lucky ones spend time in the mosque these last ten nights in concentrated prayer. And the really fortunate ones get to do all of the above in Mecca.
Of course, those of us who do not have the luxury of extra vacation time have to make do with lesser alternatives. One such alternative that is well-suited to life in America (and that I hope is replicated elsewhere) is the AMILA Ramadan Spiritual Retreat, a weekend gathering that was held last week at the Pigeon Point Lighthouse along the northern California coast. This retreat has been held for 16 years, and I’ve been fortunate to attend seven of them. A small group of men and women gather, joined by a few religious scholars, and engage in religious discussion, joint prayer, and dhikr (chanted remembrance of God).
It is difficult to describe the feeling of connection to God during these last few days. You have walked away from all that is familiar to you, staying up in the middle of the night when your body cries for your bed, holding your hands out in anticipation of catching divine mercy as it falls from the skies. There is a serenity in doing it alone, but there is also a beauty in doing it with other worshippers. It is, in many ways, the heart of Ramadan. 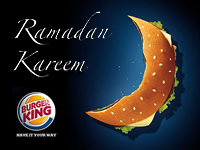 Ramadan 2007/1428: Brought to You by Burger King
archives most recent
More from Beliefnet and our partners
previous posts