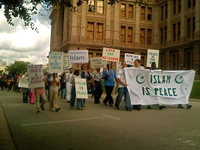 It is a difficult and challenging situation this year in that my attempts at building an internal serenity for the start of Ramadan are coinciding with the anniversary of 9/11. I spend much of the whole year (every year since 9/11) dealing with the aftermath of those terrible events through my community work and writings, and in Ramadans past I’ve been able to take a break from that, however short, in order to get myself in the proper frame of mind. But not this year.
In the past, I’ve used the month of Ramadan to introduce those who are not Muslim to something I feel is truly beautiful about my religion. Most people are familiar with the external (i.e. political, cultural) aspects of Islam, but few understand the internal, more spiritual ones. Being visibly Muslim, in that you are foregoing food and drink in plain view, provided a perfect opportunity for that dialogue–assuming, of course, that the news didn’t provide a distraction.

But this Ramadan has been heralded by images of Osama bin Laden taunting us from his cave and exhorting non-Muslims to accept Islam, obviously unaware that the actions of him and his kind have done more to bring curses down upon our beloved Prophet Muhammad and turn people away from Islam more than anything in Islam’s history. It’s imagery and words like this, and the strong feelings they evoke in me, that I have to push aside in order to focus on starting this month right.
The terrorism that I read about in the news represents the polar opposite of what Ramadan stands for. Ramadan is about opening yourself up to God’s mercy, enduring patience in the face of discomfort and adversity, and providing assistance to those less fortunate. Extremism and terrorism is just the opposite–the ultimate exercise of self-indulgence and inflicting merciless hardship on the innocent.
While I’ve been very vocal about the need to have a zero-tolerance policy against extremism within Islam, I have in the past bristled at the idea of a Muslim anti-terrorism march. I’ve felt that calls for such a march were a kind of loyalty test, meant more to placate those who distrust us than to actually combat extremism. But I had the pleasure of participating in a Muslim peace march on Sunday, which helped me remember that Muslims in America cannot truly be at peace unless our neighbors feel safe in our presence. Organizers of the march hope to make it an annual pre-Ramadan tradition, and it is one that I think will serve all Americans well.

It may not be fair, given that ordinary Muslims did nothing to bring our non-Muslim neighbors a sense of unease, but Ramadan reminds me that good things come with patience, perserverance, and selflessness. And if a concerted message for peace helps bring about harmony between Muslim Americans and their fellow citizens, then it may indeed be a very good way to begin the month.
read next post
An American Ramadan and About This Blog
archives most recent
More from Beliefnet and our partners
previous posts