‘Christian’ music? It’s about honest messages, not style, genres or even origins

To be a preacher’s kid in a Fundamentalist Christian/ Pentecostal home in the 1960s and early 1970s was to be engaged in a full-on “culture war,” even decades before that term came to define our nation’s current theological, ethical and political divides. For me, it was music that was the battleground.

Back then, the veterans of the “holiness” movement’s spillage into charismatic practice and conviction, the (self-defined)  pillars of my Dad’s churches, looked horrified if a set of drums or, Help us Jesus! electric guitars appeared one Sunday morning on the platform. Wasn’t it enough, after all, that those instruments of the honky tonk and bordello, the banjo and piano, had slipped past the cherubims and their flaming swords to enter our Eden-like sanctuary of proper musical worship?

Oh, Lord, where have all the anthems gone? (Why, right here!)

Well, OK. The piano, complete with my Mom’s wild runs and flourishes on the ivory keys that often left rivulets of sweat running down a cheek, had gotten through the sanctuary’s doors. And the Rev. Robert Mims Sr.’s banjo? Why, yes, he had turned down offers to play professionally at Disneyland, but that was in California, the land of Sinful Hollywood. . . and here he was, converting that devil’s instrument to the Lord’s use (however ill-conceived that was).

So, grit your teeth, brothers and sisters; what God apparently has musically joined together, let no one put asunder.

But one thing all agreed upon, whether disciples of the holiness movement or these wild Mimses pastoring our church: Rock ‘n’ Roll was just plain EVIL. It had, Lord protect us, PERCUSSION at its foundation! That was the beat of native drums from deepest, darkest Africa! Or, was it native beat of the Cherokees, Sioux, Cheyenne? Native, anyway. Oops. Better ignore Psalm 150:3-5, that stuff about clashing cymbals. And don’t even get started on David dancing half-naked before the Lord. Poor lad must’ve been demon-possessed.

Long story short:  I got very interested in Rock ‘n’ Roll. Forbidden fruit? Well, that’s what headphones were for, in the upstairs bedroom where I’d stealthily slap LP vinyl records onto my turntable and soar with the Beatles Sgt. Pepper’s Lonely Hearts Club Band, Steppenwolf and, hovering near the abyss to be sure, Black Sabbath’s “Masters of Reality” album.

Of course, the folks didn’t know . . . at least until the mom of one of my blabbing friends told them. Moms. It was my mother who, fuming at the demonic intrusion and her son’s “rebellion,” confiscated and destroyed Sgt. Pepper. (Had she looked in my closet, behind my backpack, she would’ve found those bizarre, long-haired hippies John Kay and Ozzy Osborne, too.)

There was no arguing that the name of a group (like the cover of a book) was no way to judge content. You know, like Osborne’s lament in “Lord of this World”about the choices a generation was making, and the inevitable cosmic comeuppance ahead was hardly an endorsement of satanism:

“You think you’re innocent you’ve nothing to fear

You don’t know me, you said, but isn’t it clear?

You turn to me in all your wordly greed and pride

But will you turn to me when it’s your turn to die?”

That was then, this is now. Today, preacher’s kids in the same denomination where my Dad began may be urged to make good choices about content in their musical choices, but the fetters on style and even message have come off. The honest Christian’s journey, after all, is more than “praise and worship,” as important as those things are as a means of lyrical and emotional interaction with Our Source.

Chirstians, human beings endure and embrace love, joy, despair, surrender and resolution. Music touches all of these emotions, and gives expression and release to them.

It has become OK, thank God, to discuss them all, and in a variety of musical styles. It’s called honesty. Believers are called to that.

It’s not the style, the beat, the instruments, the makeup or the hair. It’s the message. Sure, there are some messages we should reject, just as we would a mob’s call to murder the scapegoat of the moment, or the knee-jerk reactions to hate those different from the perceived norm. Honest judgment. But the message, the Truth, rides many trains. (Even Crazy Trains).

(Third Day) Lift Up Your Face 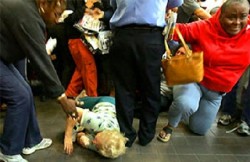 'Black Friday': More than ever, a desperate escape from tough times?
archives most recent
More from Beliefnet and our partners
previous posts