‘Black Friday’: More than ever, a desperate escape from tough times?

Perhaps my perceptions are skewed, but does it seem that as the 2011 holiday season gets underway there is a sense of desperate celebration?

Stores opened for Christmas shopping earlier than ever this week, offering margin-cutting bargains to bring the throngs into their aisles, and queuing up at the checkout stands to fork over the dollars or swipe already overloaded credit cards.

Americans – refusing to believe that the economic recession continues, that unemployment stubbornly flirts to 10 percent as another holiday season descends, or that they may be one paycheck away from the streets — stormed those stores with abandon.

It’s as if spending and joining the madness in the early morning hours of “Black Friday” was some strange, materialistic act of worship, a capitalistic flight of fancy to hold back the grim economic realities facing so many of us.

What is it, then? A courageous, if irrational act of defiance, a fistful of dollars shaken in the face of Misfortune?

Or, after three years of failed government economic recovery programs, each bailout or incentive seemingly more desperate than the last, is this a spasm that precedes a Depression that could be as much a downturn of the spirit as it is a tumbling economy?

Whether this headlong flight into the spending abyss is an act of despair, hope, or even faith in the “religion” America has so long embraced, i.e. the “Almighty Dollar,” it isn’t working.

My take? Before we became economically bankrupt, we willingly became culturally, and spiritually bankrupt.

On this Black Friday, 2011, fist fights, shoppers protecting their finds with pepper spray, even gunfights in store aisles over video gaming systems have made headlines.

People over the top. Human sharks smelling blood in the water.

And for every one such extreme example, there are hundreds more folks out there just looking for some kind of victory in their lives, even if it is getting the last of the 32-inch flat screen TVs going for $199, or snatching that hard-to-find toy from another’s hands.

Come the New Year, the debt hangover will hit. The escape will end. Reality will demand its due.

And that hole inside, where meaning and purpose used to be so treasured, will yawn as deep and raw as ever.

Will we, finally, find our faith? In ourselves, our neighbors, our God? 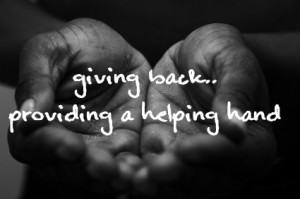 Thanskgiving: In tough times, it's all about perspective, and faith
archives most recent
More from Beliefnet and our partners
previous posts