Attacks on Cain: Orchestrated? Probably – but he still needs to answer

Two words to say about the current state of the Republican presidential nominee campaign: Good grief.

I’ve discussed before my frustration with the attitude of “born again” Christian candidates seeking to challenge President Obama in 2012. Both Michele Bachmann and Rick Perry have surged and stumbled, either through misstatements that revealed unrepentant ignorance of the facts or purposeful misrepresentation of them, or horrible performances in debates and public appearances.

Then came, out of the wind as it were, Herman Cain, yet another candidate who is proud of his Christian faith.

Like so many others watching this political circus, I found myself enamored of this former Godfather’s Pizza boss. I liked his personality, coolness under pressure and willingness to put his ideas — however undeveloped some critics may say there are — into the national spotlight.

Now come the allegations of sexual harassment dating back decades to his days with the National Restaurant Association. And as much as Cain has tried to walk away from them, they persist. He issues blanket denials, and the allegations — I do not doubt for second, orchestrated allegations — leak into the spotlight.

The latest allegations came with none other than celebrity attorney and Democratic activist Gloria Allred literally ushering the accuser to the microphone, hand occasionally in the small of her back.

Questions have arisen about the motives and veracity of the women who have, mostly anonymously and without offering any collaborating “evidence,” attacked Cain. No credible explanations have been offered about why, if these things actually occurred, the accusers have waited until Cain took the lead in GOP presidential preference polls to bring up claims from 15-20 years ago.

They were not trotted out for the press when Cain ran, unsuccessfully, for President in 2000 and the Senate in 2004. Odd, that.

The whole thing just stinks. But the stench is not all drifting from the accusers’ ranks.

The way Cain and his campaign have handled this has been clumsy, displaying an appalling back of media savvy for a man who would be President.

A blanket denial and attempts to gag reporters from asking questions about the allegation during public appearances just won’t do. Such an approach makes it look like Cain has something in his past here that won’t withstand scrutiny.

Sure, Cain has been targeted by an orchestrated campaign to tear him down, whether from his fellow GOP hopefuls, future Democratic foes, or self-seeking attorneys and clients hoping to cash in on the publicity.

But if a fire begins in your house, simply denying you set it — and expecting it to somehow extinguish itself — won’t do. Cain has to address the allegations, and if he has evidence of deliberate dirty tricks and/or the slander or the accusations themselves, he needs to lay it out.

There’s more reason for that approach that just his political aspirations. It’s a matter of integrity, too, especially for a man who had said he treasured his role as an associate minister at his Atlanta Baptist Church. For many, he is more than a would-be politician — he is a spiritual leader. 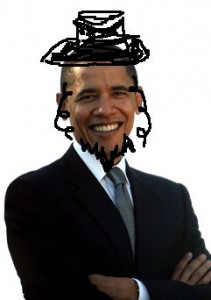 Oy vey! Jewish mag highlights Obama? How will 'Birthers' handle this one?
archives most recent
More from Beliefnet and our partners
previous posts