Zombies? No big deal. I knew a couple who attended my Dad’s church . . .

Have you heard? Vampires are passe. Zombies? “They’re baaack.”
(Shameless stolen phrase from the movie “Poltergeist,” there, with apologies for mixing horror literary references).

Zombies, not unlike Harold Camping’s frequently uttered and revised predictions of The End, seem to be cyclical. Practitioners of Voodoo, or more specifically the dark side of that West African-originated religion, have had tales of the cursed, unburied and sort-of-alive-but-soul-less slaves of evil going back into the mists of time.

Leave it to Hollywood, however, to take this obscure black magic metaphor into popular culture. Most horror aficionados agree the first real zombie movie was the 1932 flick “White Zombie,” starring Bela Lugosi as an evil voodoo practitioner. Dozens of zombie-themed flicks followed, but it was likely 1968’s “Night of the Living Dead” — George Romero’s low-budget, black-and-white story of folks in a Pennsylvania farm house holding off hordes of drooling, cannibalistic reanimated dead — that really kicked off the genre.

Romero cashed in on six more “Living Dead” films, and the original has been remade twice in the past two decades. Then there was the late Michael Jackson’s 1983 “Thriller” video, in which he led a mob of ghouls in an undead line dance. (Recreated each Halloween season since by fans all over the world).

Now, zombies are showing up, well, everywhere. The Occupy Wall Street protesters have been joined by “walking dead” costumed colleagues in railing against capitalist greed and myriad other social and political beefs. And, the recent premiere of the second season of television’s “The Walking Dead” set records for cable viewership.

Heck, even the Centers for Disease Control got in on the act, releasing tongue-in-cheek (or would it be tongue-in-brains?) Zombie Apocalypse Preparedness kit.

Wanna bet whether zombies will be showing up on doorsteps in greater numbers that ghosts, vampires or political figures this Halloween to extort your candy? That would be a (brain) sucker bet.

Back in the day, when I first saw “Night of the Living Dead,” I was especially traumatized. Oh, not because of fear over walking corpses breaking into my bedroom to eat me alive . . . but because they bore a striking resembalence to some of the folks attending by Dad’s church.

There were those retired, spinster sisters, obsessed with death and dying. Girded in their compression hose and sensible shoes,their gray hair knotted in tight buns that offset the cast of their purplish lips, these ladies would attend funerals. Anyone’s funeral. Whether they knew the dead person or not. They were big fans of the obituaries, and I do not doubt, the funeral potatoes at the after-funeral dinners.

On Sunday mornings, other parishioners would lurch toward their chosen pews, moaning in an eerie, unearthly way, as they settled their quivering hams onto the creaking wood. Sometimes, when Dad’s sermons were especially long, there would be terrifying snores and, yes, even zombie-ish drooling.

Once, welcoming a friend to a Sunday service, I cautioned him against sitting in one particular pew that had been unofficially (but certainly) reserved by one of the droolers and his wife, the Bride of Frankenstein (OK, not her real name; but she did have that white hair streak/beehive do going for her).

“Not there, Jim. That pew is reserved for the dead and dying,” I blurted out. Oops. He guffawed, but I noticed a couple malevolent stares from slow-moving parishioners.

I drew the curtains away from the sanctuary’s windows to let in the sunlight. 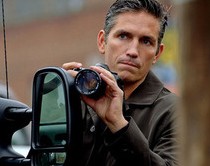 Jim Caviezel: Finally, a reward for faith, courage and talent
archives most recent
More from Beliefnet and our partners
previous posts