Occupy Wall Street: The Truth will set you free, but few news channels are telling it

Looking at the Occupy Wall Street crowd and its clones in cities nationwide, I understand the frustration over the economy in general – and sigh, deeply, at the movement’s lack of a unified message.

But as diverse as the folks participating in these protests are, one strong, focused set of demands or proposals is a forlorn hope. One thing’s for sure, though: the rank and file of Americans are, as the line from the movie “Network” proclaimed, “Mad as hell and . . . not gonna take it anymore!”

Like any grassroots movement, Occupy has its share of serious, dedicated would-be socio-economic prophets, and more than its share of oddball hangers-on: aged flower children trying to resurrect the spirit of protest from the ‘60s and ‘70s; the anti-Tea Party types; diehard Marxists; outright anarchists; not a few religious groups; and at every makeshift camp nationwide, the inevitable flood of street people lured by the free food and a rare, relatively safe outdoors place to sleep away from crowded, crime-ridden homeless shelters.

None of these disparate groups are getting what they want, except perhaps for the transients – who will likely still frequent the parks, public squares and vacant fields once the Occupy crowd tires of its crippling lack of direction . . . and winter weather.

But at least these deficits in the Occupy movement are honest ones. That cannot be said for the pundits of cable television, who have kept up a steady stream of derision and demonization, mocking the “We are the 99 percent” slogan that just may be the only concept on which Occupy participants do agree.

So, folks tune in to Glenn Beck, Bill O’Reilly or Sean Hannity and get the ultra-conservative commentary – some might say demagoguery — on the issues of the day, and lately Occupy has been the hottest. You get what you expect from them – just as you do from the other side of the political spectrum, where Al Gore brooks no dissent on global warming; filmmaker Michael Moore makes no apologies for his no-holds-barred left-wing extremism; and the Rev. Al Sharpton courts the spotlight on pretty much any social justice issue making headlines.

Know this, though: None of them are among the “99 percent” – they are all raking in incomes that put them squarely among the “1 percent,” the richest Americans who purportedly control 40 percent of the nation’s wealth.

They also are not journalists (though they seem to play them on TV); journalists supposedly are to at least make an effort at balance and fairness in reporting the news. Beck, O’Reilly, Hannity, Gore, Moore and Sharpton and others like them are advocates, or in some cases well-groomed rabble-rousers.

However, some cable news “journalists” have not just blurred the lines; they’ve long since hopped over them and scurried into the Land of Propaganda. Perhaps Fox News, and its multi-millionaire “Fox and Friends” hosts in particular, are the worst because they have the audacity to chant the “Fair and Balanced, We Report: You Decide” mantra as they carry the water (in gold-plated buckets, no doubt) for the privileged few.

I say Fox News may be the worst in this cynical faux news (pun intended, and worn) game, but it is hardly alone. MSNBC has staked out its role as the anti-Fox, exhibiting a liberal-progressive bias no less zealous – and just as skewed — as Fox is for the right wing. There are, to varying degrees, other networks promoting their own political leanings.

In John 8:32, Jesus once promised, “Then you will know the truth, and the truth will set you free.”

Ironic, isn’t it, that 2,000-plus years later, even as many of us embrace Christ’s infinite Truth, it is more difficult than ever to know the truth of our increasingly confused finite existence. 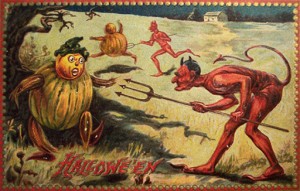 Halloween: Devil in the details of the holiday, or the distraction of misplaced angst?
archives most recent
More from Beliefnet and our partners
previous posts