The End? Another misstep for Harold Camping’s Apocalypse Boogie

First, I’m sorry for blogging again about Harold Camping’s prophetic losing streak. I will try, very hard, not to do so again. For a while.

But really, when it comes to self-proclaimed prophets, religious broadcaster Harold Camping may just be the Maxwell Smart of prognosticators.

You know.“Get Smart,“ the classic TV sendup of espionage where the bumbling spy, played by Don Adams, would excuse his latest gaffe with a half-hearted mea culpa, as in “Missed it by that much!” and hold up his forefinger and thumb to indicate just how close “it” was.

The joke, though, was that Maxwell was never that close. He was always way off, and clueless. Funny for a TV show.

Not so funny for a Doomsday prophet, when people who believed him sold their belongings to pay for billboards proclaiming the end; not so funny when Prophet Hal was not only wrong about May 21 being the End, but October 21 (his revised prediction) . . . and previous to that, September 6, 1994.

Why do people continue to listen? Jesus, who should know something about how these End of Time things work, warned 2,000 years ago that no one by his Heavenly Father knows when Earth gets its comeuppance. In fact, Jesus said not even he knew “the day nor the hour.”  Camping and others professing some hidden knowledge go through all sorts of painful semantics to change the meaning of that simple statement, but it’s pretty clear to me: No one knows.

That doesn’t phase Camping or others. And somehow, it always comes down to money from the faithful being a sort of starter fluid for prophecy.
Well, this time Camping says he’s just a bit “embarrassed” that the world didn’t end. Again.

In a message left on his website, Camping, 90, allowed: “When it comes to trying to recognize the truth of prophecy, we’re finding that it is very, very difficult.”

No, Harold. No “difficult” about it.

That’s why we who call ourselves Christians are supposed to live in love, as if every day could be our last, do what Jesus taught us to do with our fellow humans — love them, while we can. Bind up the wounds, spiritual and physical. Care for widows and orphans. Be peacemakers. Forgive. Pray. 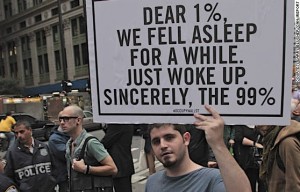 Occupy Wall Street: The Truth will set you free, but few news channels are telling it
archives most recent
More from Beliefnet and our partners
previous posts