Raid on church misses New Testaments … police didn’t know what they were!

Police raiding a 100-member Baptist church in Sumgait in the former Soviet republic of Azerbaijan, confiscated members’ Christian literature and Bibles, but left behind New Testaments — apparently because they didn’t recognize what they were.

A frightening aspect to the raid, is that officials are raiding church services in private homes for the first time, according to International Christian Concern officials. ICC is an advocacy group speaking up for persecuted Christians worldwide.

When challenged by the pastor for a search warrent, the policeman directing the raid told the congregation “I’m the permission and the warrant,” reports Felix Corley of the Forum 18 news service in Norway.

The church was raided because it cannot obtain the compulsory state-issued registration. Azerbaijan is 93.4 percent Muslim, 2.5 percent Russian Orthodox and 2.3 percent Armenian Orthodox. An official of the State Committee for Work with Religious Organizations defended the raids, claiming they were “in accordance with the law.” The raids came two days after the Azerbaijan parliament approved yet further restrictive amendments against Baptists, which they consider to be a “dangerous cult.” 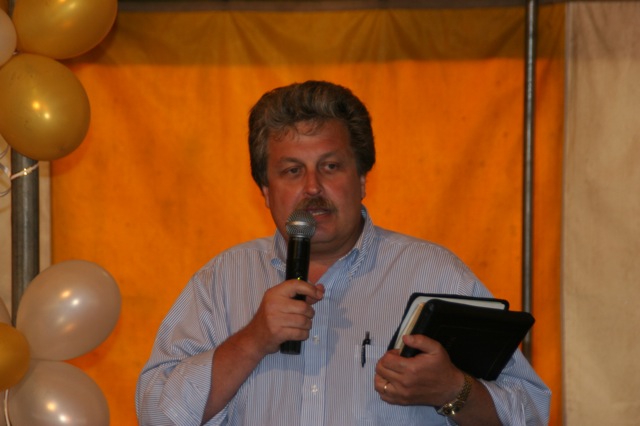 The church in Sumgait, near the capital city of Baku, was raided during Sunday services on June 12. A spokesperson for the State Committee defended the raids, telling Forum 18 that  “Law-enforcement officers conducted these operations, which were in accordance with the law.”

The spokesperson would not give his name. When asked how raiding worship services was in accordance with religious freedom commitments within Azerbaijan’s Constitution and the country’s international human rights commitments, the spokesperson ended the telephone conversation.

Azerbaijan’s increasingly restrictive religion laws have been tightened 13 times since the nation received independence in 1992. The latest changes were approved on 10 June. They require that for any group to receive official recognition, there must be at least 50 adult founding members — up from 10 previously.

Also, government officials tightened their oversight of all religious education as well as the role of local religion regulators.  The amendments have aroused concern among Christians in Azerbaijan.

A number of congregations which filed their re-registration applications in 2009 are still waiting for official approval.

About 100 people were attending the Sunday morning worship service when about 20 uniformed and plainclothes police officers entered their meeting area.

“We had been praying together for about half an hour when they burst in,” said one member who asked not to be identified. “We asked them to wait till the end of the service, then we told everyone present that it was up to each individual’s conscience whether they gave their name as the police were demanding.”

Police blocked all the exits to the church building, then forced members to present identity papers as they left. Police also filmed congregation members, searched the church premises and took away all the religious books they could find.

“They did not take New Testaments in both languages,” said the spokesman. “They didn’t seem to know this is part of the Bible.”

The Interior Ministry website report of the raid the following day noted that 4,645 booklets, 9,229 books, 152 religious textbooks and 2,470 religious invitations were seized and have been handed to the State Committee for it to assess whether they are legal.

Those raiding the church refused to give their names.

Three church members, including Pastor Pavel Byakov, were taken into police custody and questioned for several hours. Byakov was told his church’s meetings are illegal because it is not registered. Officers told him he would be fined 100 Manats ($127) under Article 299 of the Code of Administrative Offences.

Byakov told police that the church, which is a member congregation of the Azerbaijan Baptist Council of Churches, has no intention of applying for state registration, as it does not believe it needs it. He asked what the police would do when the church continues to meet. Officers told him the next fine would be increased to 150 Manats.

“Pastor Byakov does not believe he has done anything wrong, so he will not pay the fine,” one member told Forum 18. “We have been meeting for worship in the same building for more than 20 years and intend to carry on doing so.”

Police and the local religious affairs official raided three Sumgait churches in mid-May, confiscating Christian literature. In April, riot police blocked the entrances to Star of the East Pentecostal Church to prevent them from worshipping.

A Russian Christian leader visiting the country, Sergei Rakhuba, reports that several pastors have been imprisoned for many months for activity on behalf of their church.

“Officials would provoke them into something, throw them in prison, and persecute them,” he reported.

While persecution has increased, it hasn’t affected church growth in the predominately-Muslim nation. Rakhuba says young people are open. “They say, ‘We want to have a relationship with God. We want to know more about God. However, traditional Islam does not give us any grounds to learn more about Him.'”

Many are turning to Christ as Christians reach out covertly with the Gospel, says Rakhuba, and these new believers are passionate about evangelism. “They’re so active. They’re so clever. They’re so strategic in reaching out to villages in Azerbaijan under tremendous threat.”

Aside from official persecution, these new believers have other challenges, he reported.

“When we asked, ‘What are your needs?'” they all requested Scripture and training.

“Like in old Soviet days, they can print Scripture underground,” said Rakhuba. “So I would encourage people to pray that God would provide resources to provide Scripture for Azerbaijani believers.”