Another 20 Christians were arrested Sunday, (June 5, 2011) as the Chinese government continued its campaign against the Shouwang Church of Beijing.

Many of the congregation’s leaders have been under house arrest for over two months.

Members of the 1,000-member church have gathered in a public square to pray every Sunday, since April 10, after authorities pressured landlords of the various facilities they have rented to close their doors to the church.

Pastor Jin Tian Ming, founder of the church, who has been under house arrest for nine weeks, says the police have detained hundreds of members. Before the June 4 anniversary of the 1989 Tiananmen Square massacre, dozens of the faithful were summoned by police and either threatened or placed under house arrest.

To watch a video smuggled out of China about the underground church, CLICK HERE

The goal, says AsiaNews, was to prevent any kind of protests or public meetings.

Police have also targeted the personal lives of some followers with threats of losing their jobs. Jin said that four leaders of the church, including a pastor and two deacons, have distanced themselves from the decision to meet to pray in the streets. In a letter to the faithful, Jin said that “our colleagues’ departure has shaken the whole church, like an earthquake.”

In 2009, the church purchased an entire floor of a high-rise building, but the authorities have blocked its being used.

Why such efforts against a harmless bunch of Christians? For years, the Communist government has targetted home-based churches in an attempt assimilate them into the Three-Self Patriotic Movement Church, which is controlled by the Communist Party. Pastors are paid by the Party, which approves their sermons beforehand. Any Three-Self pastor who is successful in building up attendance or establishing effective programs is transferred to distant, rural congregations and placed under the supervision of a pastor who will keep things in check.

As the campaign against Shouwang continues, the China Aid Association, U.S.-based group of expatriate Chinese Christians, denounced the “administrative” arrest of pastor Enhao Shi, Vice President of Chinese House Church Alliance. He was held for 12 days at the Suqian prison in Jiangsu.

Even Meiling Chang, also a follower of the CHCA, was sent to 12 days of administrative detention imposed without trial.

In China is estimated there are far more unofficial Protestant Christians (as many as 80 million to 120 million) than there are members of the Three-Self Patriotic Movement Church, which officially has 20 million. No one under age 18 is allowed to attend a Three-Self church — and teaching children about Jesus is classified by the authorities as a form of child abuse.

To read more about China’s persecution of a Christian lawyer, CLICK HERE

Control is the issue — with the Communist Party determined to be the only social organization in China. Beijing fears that any movement not controlled by the Party could trigger a “jasmine revolution” similar to the one that is rocking the North Africa and the Middle East. This fear is caused by the fact that many human rights activists have converted to Christianity, said a China Aid spokesman. 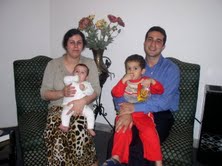 Do you dare to get involved?
archives most recent
More from Beliefnet and our partners
previous posts