Do you dare to get involved?

Congress is discussing the end of a 20-year humanitarian program allowing persecuted Christians in Iran access to the American Embassy — so that they can apply for refugee status and protection, according to International Christian Concern.

Without this program,  says ICC, persecuted Iranian Christians who are unable to flee the country will likely face imprisonment or execution. If the program is not renewed, 688 persecuted Iranians who have already begun the refugee application process will be trapped in Iran and may be arrested along with the 254 Christians who have been arrested since June 2010. The ICC is an international advocacy group supporting the persecuted church.

One of the imprisoned, Pastor Yousef Nadarkhani, was given a death sentence for apostasy in September.

“Congressman Lamar Smith, chairman of the House Judiciary Committee, is calling for oversight of this amendment and all immigration policy, which could lead to the end of the program in Iran,” said ICC in an appeal to Americans to take action. “You can make a difference. Call Congressman Smith and the other members of the House Judiciary Committee and ask them to permanently instate the Lautenberg Amendment.”

Not sure what to say? ICC recommends these talking points:

“I understand that Chairman Smith and the judiciary committee is withholding the Lautenberg Amendment from the budget until it can be further investigated.

“I am calling to voice my concern over this move and ask that the committee support this important program in the budget as soon as possible to ensure that it is not ended, and that if it is stopped during the investigation, the committee will instate provisions for the immediate safety of Iranian religious minorities.”

“I am concerned over the severe persecution that Baha’i, Christians and Jews face in Iran, and believe that if we cut this program it will send the wrong message to Iran about our support for the religious communities increasingly being targeted by the government.”

“I hope you will allow this program to go forward on the budget so that it does not have to be moved in a stand-alone bill which would draw more dangerous attention to the religious communities already suffering in Iran.”

After you’ve made the call yourself, spread the word and ask your friends to call. You can forward them to this article. 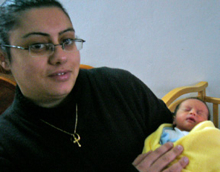