Perhaps it is my own opinion, but I think that there is a difference between family movies and children’s movies. Disney is a master for producing movies that literally every member of the family can watch and enjoy. Some moviemakers tend to think that any juvenile movie can be considered a movie for the whole family, but that just isn’t true. It’s sloppy filmmaking. Two good examples: 101 Dalmatians = family movie, Air Buddies = children’s movie. (Even Disney gets it wrong occasionally).

Now available on DVD today, Golden Shoes has good intentions and has been endorsed by Dove.org. This is due to the film’s positive storylines about family, working together as a team and is altogether wholesome fare. But while film may be wholesome, that doesn’t mean that the movie is great. That might sound harsh and no one was intending for this movie to be nominated for an Oscar, but overall, the film is subpar.

Golden Shoes may appeal to children under the age of ten, but for those older, like their parents, they will have a tough time sticking through with it. At just 89 minutes in length, it feels like a half hour too long. The film’s biggest flaw? The acting ability of the children involved. Christian Koza is weak in the starring role, but he’s not alone. It appears that every child actor in this film had their lines down, but not the emotions or facial expressions. Some may think children audiences can’t tell the difference between a good child actor and a poor one, but they can. The movie intends to have some heartstring-pulling moments, but they are lost with the lack of emotion. It also tries to make up for it by turning the soundtrack music up higher in some scenes. It doesn’t work.

For those who care, the rest of this review will feature spoilers, something that I don’t normally do, but without them, it would be incredibly hard to explain why this movie is so bad.

Golden Shoes is sort of a mashup of Cinderella, Dumbo, Saving Private Ryan and The Sandlot. Seriously. The story is about eight-year-old Christian Larou (Koza) who dreams of becoming the next great soccer player like his idol, Cristiano Ronaldo (they almost have the same name – imagine that). His father (Joshua Morrow) is on duty fighting a war in Afghanistan. Christian is understandably sad about this, but he also tells us so numerous times. That’s okay, since cringe-inducing neighbor, Frank (Eric Roberts) is happy to help the boy and hit on his mother.  When Christian’s mother Kathleen gets into an automobile accident (haven’t we told you not to talk on the phone when driving?) it is up to Frank to take care of Christian until she can get out of the hospital.

Just like the Cinderella story, the evil stepmother, er, Frank, sets up a temporary bedroom for Christian in the basement. He has two evil , sons who also pay on Christian’s team. Noticing that Christian is in need of some new soccer shoes, Frank takes him to a sports store where the boys meets his fairy godmother in the form of Montel Williams. Frank makes it clear that Christian is not his son and only wants the cheapest shoes available. Williams finds a pair in the back that look strange, but like the magic feather that Dumbo holds in his trunk to help him to fly, these shoes seems to give Christian an incredible ability to play soccer like a pro.

Meanwhile, a few scenes are shown of Christian’s dad fighting the war and taking care of his fellow soldiers. He’s not going to leave anyone behind. This is apparently to show that he is still alive, otherwise it has nothing to do with the story.

After a few games, Christian’s skills begin to blossom and he leads his team to victory much to the delight of his coach (David Deluise) who has felt like a loser all his life, but thanks to Christian, he now feels like a winner. (Great. Put more stress on the kid.) Soon, the boys’ amazing game-playing is taken notice by … get ready for it … the White House. The president is informed that the boy’s mother is in the hospital and that his father (who has been found by the way) is still in Afghanistan. The president decides that even though Joshua is helping to keep our country safe, he needs to be flown back pronto to see his son play the championship game. At the same time, mother Kathleen is given a pep talk from Nurse Mary (Vivica A. Fox who is on screen for about three minutes) on how Kathleen needs to get on her crutches and make it to her son’s game.

However, Christian has been locked up in the basement by the evil stepmother Frank who has stolen the Golden Shoes. Thankfully, the neighbor’s dog arouses his owner (John Rhys-Davies) who comes to see what all the ruckus is about. Through the basement window’s glass he asks the boy why he should help him and the boy writes a note saying, “Because you’re my angel.” (Really?)

Eventually, Christian makes it to the game, but he doesn’t have his golden shoes. The coach gives him a pep talk telling him that he doesn’t need those shoes to play, he just needs to believe in himself. So Christian goes out there and wins the game just in time for his hobbling mother on crutches and his long lost father can see his last play. And that’s about it.

On the movie’s DVD cover it says that “believing in yourself is the greatest goal of all.” Not to get too spiritual or nit-picky, but do Christian parents want one more message for their children that all they need to do to succeed in life is to just believe in themselves? Why not share the value in believing in something or someone (like, Jesus perhaps?) greater in themselves for guidance? Just a thought. 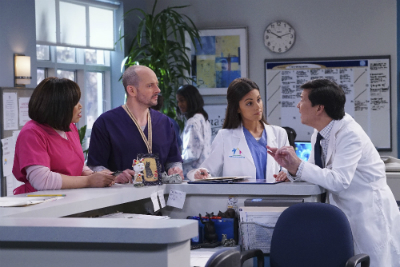