For many theatre devotees, this past Sunday was the dramatic equivalent of the Superbowl – the Tony Awards. When I was younger I got so excited for the evening and watched it on TV with my family, but in past years my interest has drifted away from the bright lights of Broadway to the dimmer lights that come from smaller theatres in the Village and in Brooklyn. I’ve been disappointed with the general spirit of Broadway these days – the spectacle shows that are high on the budget but low on the substance. Every time I walk through Times Square I feel a little bit more overwhelmed by the sensory barrage of lights and smells and colors and frantic tourists. Maybe I’m too sensitive, but I’d rather be just about anywhere else.

This year, however, my interest has been rekindled…and no, I’m not obsessed with Billy Elliot, but I do think it’s cool that three kids are sharing the award for best leading actor in a musical. 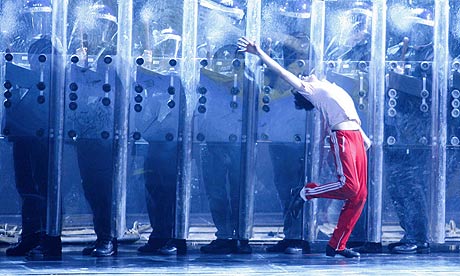 (Image courtesy of The Guardian).

But that’s not why I’m back to Broadway, either…

One of the segments they do every year during the Tonys is In Memoriam, where we are given a chance to reflect on the theatre legends that have died in the past year – actors, playwrights, lyricists, composers, agents, directors. This year they opened up with a slideshow of pictures of Natasha Richardson in her theatrical glory in Cabaret and Streetcar, and I felt incredibly sad. I know I’m not just obsessed with celebrity – Richardson was immensely talented, and having had the privilege to see her perform makes me feel like I saw a part of her passion for life. This year we (and by “we” I suppose I mean the theatre community) also lost the theatre critic Clive Barnes, playwright George Furth, playwright Harold Pinter, actor Bea Arthur, and actor Paul Newman. As I watched the slide show, name after name appeared on the screen and I kept thinking, “Oh wow, that person died this year. And that person. Oh yeah, I forgot about that one.” I thought about how many lives were touched, how much was created by those faces and names.

I had a theatre teacher in high school who at the beginning and end of every production would remind us, “The theatre is transient.” It takes so much time and so many people to build a play, and then it’s gone. The traces that are left are in the costume scraps, dog-eared playbills, the tunes that get stuck in your head, the script on the bookshelf in the living room. And what are they individually without the people and the live music and words weaving through the audience? They are just objects. They in themselves are not the theatre.

The list that the American Theatre Wing gives on the In Memoriam section of its website is long. Some of the names I recognize, most I don’t. It makes me think about what my legacy will be. Will I be on a list somewhere of people who made a difference? How will I be remembered? I feel the weight of the world on my shoulders to start creating something great now. Go. Write. Get off your butt and be productive and brilliant and win something so you can get up there and thank everybody. I want to be remembered. I don’t crave fame or fortune, just a little bit of immortality, I suppose. A piece of me that will stick around.

The theatre is transient, and so am I, and so is everything I will create, I must remember. Although I dearly want to believe that there’s something that is immutable about this thing called life. Is it for love that I create? To be loved and to create and spread love in the world – to me this is the greatest achievement of all.

And that’s what I see in theatre. Bring it, Broadway.