David Carradine and the lure of the East

As has been noted, actor David Carradine died recently, in Thailand, under circumstances suggesting an autoerotic asphyxiation accident. There. That’s about it. 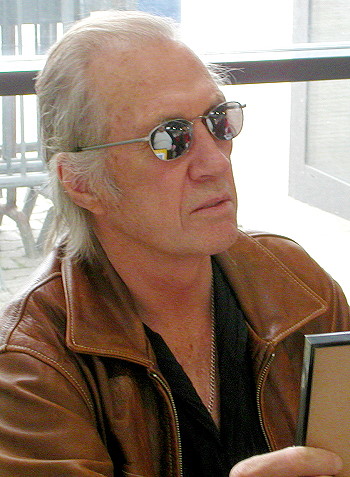 Lead singer of INXS, Michael Hutchence, died similarly 12 years ago, in Sydney, Australia. Yet there seems to be a much higher level of interest in this sad celebrity death than there was in Hutchence’s.

Why? Cuz Mr. Carradine’s character was usually in scenes that said stuff like this:

Master Po calls his young student “Grasshopper” in reference to a scene in the pilot episode:

Per the “Kung Fu” wiki entry, it was dialogue such as this that entranced a generation in the wood-paneled basements of the 1970s. Like me!

I wasn’t the only one, of course. As fellow blogger Ethan Nichtern noted earlier, David Carradine earned
fame for his “pseudo Eastern spirituality” roles in the 70s tv series
“Kung Fu” and later in the Kill Bill films of Quentin Tarrantino.

Americans have long been fascinated by,
understood, misunderstood, and generally exoticized Eastern philosophy and culture. In fact, most of Western European culture is in the same colony-making, other-fearing, other-loving boat of confusion.

Writer Mark Salzman, in his 1986 memoir Iron & Silk, chronicled his own interest with Eastern martial arts and spirituality. Like me, he grew up in southern Connecticut, fascinated with “Kung Fu” and other such glimpses of Eastern philosophy, however refracted they were by Warner Bros and others. Unlike me, he went to China and studied Shaolin martial arts for years while teaching English and learning Chinese.

I wound up with yoga and buddhism, but the spell of “Kung Fu” continues; when I told my pal Claire that I had been certified as a yoga teacher, she asked me if I was now going to cut off my ponytail in some kind of ancient TV series reference. Sigh.

But I find articles such as this one in USA Today quite heartening. According to some recent research, 1 in 11 Americans meditates.

Do we all get to hear those grasshoppers someday? R.I.P., David Carradine. The interdependent ways of the world are odd, and I don’t know if representing pseudo-Eastern spirituality is generous or not, but you probably got more than a few fannies on the cushions and into the zendos.

Meditation Retreat! Deep Healing for The Non-Self
archives most recent
More from Beliefnet and our partners
previous posts