According to an article yesterday in USA Today, meditation, “once thought of as an esoteric, mystical pursuit . . . is going mainstream.” One might argue that if it’s in USA Today, it already is mainstream, but in any case. . . 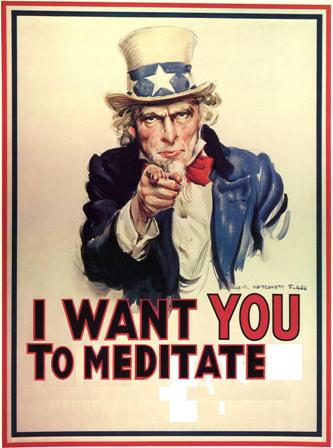 The article has a few interesting bits of info.
For one thing, more congressmen are coming out of the meditation closet:

Rep. Tim Ryan, D-Ohio, feels he has to arrive at the top of his game every day. And Ryan says he has found a way to do that: He meditates for at least 45 minutes before leaving home. yan, 35, sits on a floor cushion, closes his eyes, focuses on his breath and tries to detach from any thoughts, just observing them like clouds moving across the sky — a practice he learned at a retreat

Another interesting factoid shared is: a government survey found that one in eleven Americans, or 20 million people, have meditated in the last year. Jon Kabat-Zinn reports that he has seen “a colossal shift in acceptance” of meditation as a normal activity in for Americans.
Of course, meditation can mean a number of things to different people, but article focuses specifically on the sort of mindfulness meditation Kabat-Zinn has popularized, which is Buddhist-influenced at the very least.
Cheers America, happy meditating.
read next post