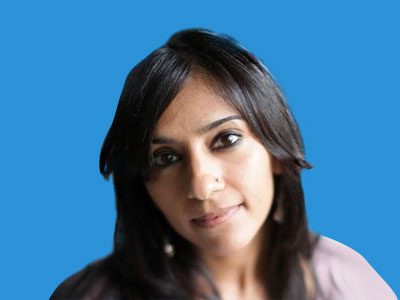 Vineet Chander is a legal and communications consultant, writer, and teacher, specializing in the Hindu diaspora community. He is a Hindu Chaplain and the Coordinator for Hindu Life at Princeton University, and serves as the North American Director of Communications for the International Society for Krishna Consciousness (ISKCON), a worldwide organization representing the Vaishnava Hindu tradition. In previous incarnations, Vineet has been a New York City prosecutor, a cable TV show host, and a hospital chaplain. In his free time, he enjoys relaxing with his wife and his new baby, attending classes at The Bhakti Center, and teaching himself photography. As a second-generation, Indian-American, Vaishnava-Hindu, Vineet ponders new ways of further hyphenating his identity.

By Vineet Chander
Fifth graders can be unbelievably cruel with their words. Keenly aware of this, my fifth grade teacher devised a simple demonstration to get us to see the need to be more mindful of what we said and how we said it. Calling up a volunteer, she handed the student a tube of toothpaste and asked…

Get Him to the Hindu? On Russell Brand's Sanskrit Brand

By Vineet Chander
With Russell Brand’s highly-anticipated (and raunchy) comedy “Get Him to the Greek” hitting theaters right about now, the controversial British comic is becoming quite the talk of the town this side of the pond. He even graces the cover of Rolling Stone magazine, in a shirtless kinda-Jim-Morrison-esque pose: Wait, did you catch that Hindu-looking tat…

By Vineet Chander
Ever wondered what its like to be a monk? Hinduism celebrates both asceticism and pragmatism; enlightenment can be attained, the wise explain, both by renouncing the worldly and (properly) engaging with it. Hindus revere the monk — whether a student (brahmachari) or a master (sannyasi) — for his self-sacrifice, detachment, and singular focus on a…

Will Top Kill work? Only if it goes deep enough.

By Vineet Chander
The good news: BP’s  procedure to plug the oil leak — ominously named “top kill” — seems to be working. The not-so-good news: new estimates show that the spill has already surpassed the notorious Exxon Valdez disaster. It is, officially now, the worst oil spill in U.S. history. Is there a paradox here? We’re probably…
back to index archives
search this blog
SUBSCRIBE:
More from Beliefnet and our partners