Get Him to the Hindu? On Russell Brand’s Sanskrit Brand

With Russell Brand’s highly-anticipated (and raunchy) comedy “Get Him to the Greek” hitting theaters right about now, the controversial British comic is becoming quite the talk of the town this side of the pond. He even graces the cover of Rolling Stone magazine, in a shirtless kinda-Jim-Morrison-esque pose:

Wait, did you catch that Hindu-looking tat on Brand’s inner bicep? Yup. He and fiancee Katie Perry actually got matching ink with a Sanskrit phrase.  Here’s a closer view:

What does it mean? And, really, what does it mean? Is bad-boy Brand officially declaring himself a Hindu convert? Or is this just another case of a celebrity dabbling in Indian exotica because its trending right now (cough, cough, Rihanna, cough, cough)?

Of course, Brand’s tattoo is far from his first contact with Hinduism. For years , the comic has said goodbye to his audiences by chanting the mantra “Hare Krishna,” leaving some to wonder whether the comic is seriously invoking the name of Lord Krishna, or merely setting us up for another gag (a gag with an X-rated punchline, no doubt).

When it comes to Hinduism his interest seems to be sincere. According to a piece in the Guardian a few years ago, Brand’s affiliation with the Hare Krishna movement, a Vaishnavite Hindu tradition, is more than just a publicity stunt:

Was Brand, who waffles about spirituality almost as much as his
sexual conquests, mocking his moral guardians in the media or saying
something more heartfelt?

“I’m a spiritual gent and increasingly
that’s the level I want to vibrate on, were it not for my crazed lust
for sex and glamour,” Brand intoned earlier this month. “I say Hare
Krishna as often as possible, sometimes even when I’m not being filmed,”
he wrote in his Guardian column 18 months ago, soon after the press
discovered his sporadic visits to the Krishna temple in Watford (George
Harrison’s home until he handed his door keys to the Hindu movement in
1973)…

Kripamoya Das, a priest at the
Watford temple…believes Brand takes the religion seriously
and was not using the chant frivolously. “We feel that he was saying
‘Hare Krishna’ in good faith and that there are two sides to everyone –
their external public life and their internal, spiritual life.”

According to other reports, Russell “feels indebted” to the Krishna movement for helping him to beat his notorious sex and drug addictions.

In an interview with the Observer Magazine, Brand recounted his first meeting with the Swami:

He had an encounter with a swami in Soho Square and it spun his head
around. Russell looked into the swami’s eye and the world dissolved, and
he became aware that everything is connected, atomically, and it’s
ludicrous to imagine we are separate from anything, when we are all just
vibrations. ‘I felt the absolute certainty that consciousness is in
tune with enlightenment, and I could access it. In the same way I feel
desire for a human, I felt desire for that; it was something that I
wanted, and it kind of made me blush.’

Russell also expressed his admiration for Radhanath Swami in other interviews, calling him a “beautiful fellow” who has “got the answer.”

(Full disclosure: Radhanath Swami, whom I have blogged about before, happens to be my own spiritual mentor… which would make Russell and me sort of, kind of, maybe god-brothers?!) 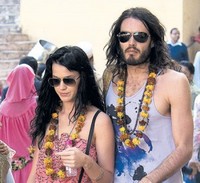 So is Brand the real deal as far as being Hindu? Well yes and no. Yes, if we’re going by sincerity of purpose and genuine interest. No, if we’re expecting him to live up to some kind of Hindu poster-boy image. Brand struggles with his vices, habits, addictions, and drama. His interest in Hindu spirituality is one aspect of his persona. He’s got others. In other words, he’s human.

No doubt, some of the more conservative Hindus out there might still feel like distancing themselves from Brand or even speaking out against him. For them, his spiritual interests and moral transgressions or bawdy antics may seem impossible to reconcile.

And it is an annoying but undeniable reality that there are certain opportunistic “leaders” in the Hindu community who seek to piggy-back on a celebrity’s flirtation with Hinduism in order to catch their own 15 minutes of fame. Such self-acclaimed “spokespersons” get to work pumping out press releases, condemning the celebrity for his or her “inappropriate use” of Hinduism… as long as it gets them quoted in some tabloid article as an authority on the faith.

Such critics might benefit from a less judgmental view, such as the one offered by Kripamoya Das, the Watford temple priest who was inclined to give Russell the benefit of the doubt. His take on Brand:

Oh, and as for those still wondering what Russell’s Sanskrit tattoo actually means… it’s supposed to say anugacchatu pravaha. Loosely translated, that means “Go with the flow.” When it comes to figuring out Brand’s relationship with Hinduism — and giving him the space to figure it out for himself — that may prove to the best advice of all.