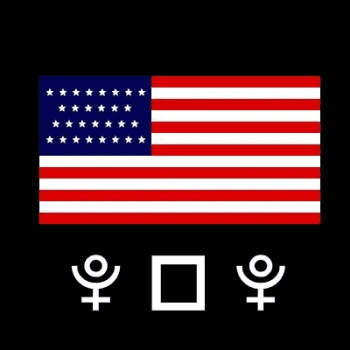 (This is part of a series looking at America’s impending Pluto Return. CLICK HERE for the introduction)

Since America has never had a Pluto Return before now (Pluto makes it around the Sun once every 248 years). it’s hard to look back and make any confident predictions the same way we could with, say, a Saturn Return or a Jupiter Square. However, the Pluto Return will likely be stressful, and it may be informative to look at the events surrounding the Pluto Squares and the Opposition. Now, set the dial on your Wayback Machine to 1846 and let’s see what was going on when Pluto was within 3 degrees of the exact square to America’s natal Pluto at 27 Capricorn…

POLITICS: James Polk, best known now for his expansionist views,  which led to the annexation of Texas and the Mexican-American War (see below). He was replaced by Zachary Taylor, best known now for his indifference towards politics and grazing his horse on the White House lawn. Died of unspecified stomach disease in July 1850. He was replaced by his Vice President, Millard Fillmore. He’s best known for not being very good at his job.

ECONOMICS: Not too bad at all, actually. The longest economic expansion of the United States was between 1841 and 1856. Also, the California Gold Rush began in 1848

WAR: The Mexican–American War (1846–1848). History is complex and the history of war even more so. But to simplify: The Mexican-American represents the first time ever that The United States Of America engaged in warfare against a sovereign nation for the primary purpose of increasing its territory and influence.

(pause for laughter from the Native Americans in the room)

HUMAN RELATIONS: Millard Fillmore was President during the Compromise of 1850 (which helped extend slavery) and The Fugitive Slave Act, which made it legal for slave-holding States to legally recapture escaped slaves who had made it into the Northern States.Oh, and the official policy of “Indian Removal.” Because, you know, Native Americans kept stubbornly refusing to leave the land they had lived on for generations.

DISEASE: 1847 was a tough year for infectious disease. Not only was there the 1847 Southern United States yellow fever epidemic, but was also the beginning of a global influenza epidemic.

NEXT TIME: Sometimes when the going gets tough, the tough need a New Deal.

The Astrology Of America's Pluto Return: Introduction
archives most recent
More from Beliefnet and our partners
previous posts