Transits That Kill You (But Then You Get Better) Part Two: The Day I Died 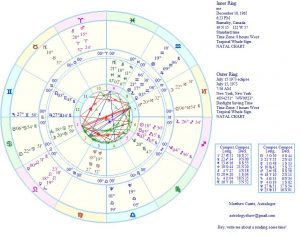 Imagine for a moment that it’s 1973 and you’re an astrologer wrapping up a reading for a couple that has recently moved to a new city. You cover all the basics and you seem to have done a pretty good job. Since you have a few minutes left over, the parents have you look at the birth chart of their child. That’s when the ethical dilemma hits you.

You notice that the child has a boatload of incredibly difficult transits, all coming to a peak around the middle of July. This kid has a close Moon in Cancer-Mars in Capricorn opposition with the Moon very close to the ascendant in his birth chart. Transiting Uranus is closely square those points, and transiting Neptune is passing over the child’s Mercury-South Node conjunction, and transiting Saturn is conjunct his Jupiter.

Then you notice that there is a Lunar Eclipse on July 15th, closely conjunct the boy’s Mars and descendant, and for bonus points transiting Mars will be square that point too.

What, as an astrologer, do you predict will be the outcome of these transits? You got to admit they sound pretty terrible, but no sane astrologer would start shouting about the child dying. The most reasonable response would simply to be to tell the parents to keep a close eye on him, because maybe the recent move is affecting him emotionally or something. That would be a nice, safe interpretation, wouldn’t it?

Like most kids in the 1970’s, I grew up in a much less supervised environment then most children do now. Yes, we played with Lawn Darts. Yes, we often stayed out late playing with our friends without our parents having a clue where we were. Yes, we even occasionally wandered into stranger’s houses.

My childhood was, if anything, less supervised than the norm for that time. Frankly, as a Sagittarius, that was perfectly fine by me. Given all this, it’s no surprise that in the summer of 1973 I found myself (without benefit of swimming lessons) splashing around near the shore at Turtle Lake, Saskatchewan — all by myself.

I haven’t gone very far into the lake, but I hadn’t realized there was a sudden drop off, and that there were weeds I could get tangled in. I went under the water. I couldn’t get back up. I drowned.

Drowning is as horrible as you might think. But that’s not where the story ended.

After a few moments of unbelievable terror I suddenly became amazingly calm. I was fortunate that, as it turns out, if you are a child who drowns in Turtle Lake Saskatchewan, there is a woman made entirely of light at the bottom waiting to help you.

After that moment of complete calm, something happened that I can only describe as being an explosion in my mind.

Imagine an old-fashioned 24-volume encyclopedia, except that this encyclopedia doesn’t delineate human knowledge, it expresses the Divine Will and Purpose of the Universe and your place in it. Now imagine that encyclopedia compressed into a bullet, which is shot into the front of your head, blasts fragments throughout your brain, then reassembles itself and exits your head. I didn’t retain much of the knowledge that was launched into me, but there are a few things I can tell you.

Have you ever thought that the Universe is not intelligent and alive and interconnected? Have you ever doubted that the Universe cares that you exist? Do you ever wonder if making the world a better place or being kinder and more patient with yourself and others is somehow not a good idea? Do you ever question that all the moments of horror and stupidity and selfishness we inflict on each other down here cannot and should not be overcome?

Have you ever doubted that your life is worth it?

If any of these questions plague you, drop me a line and I’ll set you straight. And: thank you for sharing this moment of your glorious, ever-unfolding, multiverse of a life here with me. 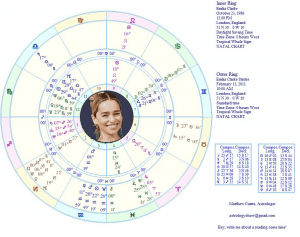 Transits That Kill You (But Then You Get Better) Part One: Emilia Clarke
archives most recent
More from Beliefnet and our partners
previous posts