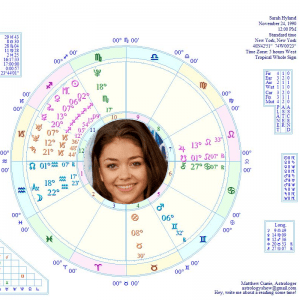 Astrology and medicine have a long history together. Although of course one should never take an astrologer’s word over a physician’s word for a medical condition, astrology can be incredibly useful when it comes to choosing a date to have surgery. Case in point: the two kidney transplants that actress Sarah Hyland has had.

Sarah (born November 24th 1990, time unknown, New York City) is best known for playing Haley on the series Modern Family. What fewer people realize about Sarah is that she was born with kidney dysplasia: malformed and dysfunctional kidneys.

In astrology, the kidneys are ruled by Venus. Sarah’s Venus is at almost 8 degrees Sagittarius, and is closely opposite her natal Mars in Gemini. This, in and of itself, is only one risk factor for kidney disease — but it’s a fairly significant one. Her Mars is also closely opposite her Sun-Venus midpoint, which is another factor indicating concerns about kidney health. Saturn is also closely aspecting her Venus-Mars midpoint, and that is another factor. Even without a time of birth it’s easy to see how there could be a problem in this area.

Sarah has had two kidney transplants. The first one came from her father, and the second one came from her brother. Both surgical dates are instructive as far as her transits at the time and the results she has gotten.

The first transplant occurred in April of 2012. At that time the transiting North Node was conjunct Sarah’s Venus. That indicates that the transplant may have been a matter of “karmic destiny,” (although I hate putting things in those terms). Transiting Neptune was square her Venus-Mars opposition, and transiting Mars was square her natal Venus and Mars. Furthermore, this happened during Sarah’s Saturn Square, which is yet another indicator of difficulty.

For unknown reasons, Sarah’s body began rejecting her father’s kidney in early 2017. So on September 19th 2017, she have a second transplant. Although the kidney transplant itself seems to have gone well, there are still some worrisome signs that this may not be permanent either. At the time of surgery, transiting Mars was at 9 degrees Virgo, closely squaring her Venus-Mars opposition.

Although some of the indicators for the second transplant are better for her than the first one, there is still some concern. Sarah will be having her Saturn Return at the end of 2019 and early 2020. Remember that the first (and ultimately unsuccessful) transplant happened during her Saturn Square.

We should also note that Sarah has recently discovered she has endometriosis. Endometriosis is a painful condition in which the lining of the uterus overgrows and starts invading other organs. For issues involving the uterus, we look to the Moon — and at this point if you know your astrology it probably shouldn’t come as too much of a surprise that Sarah has a Moon-Pluto square in her birth chart. Furthermore, in her Vedic chart there is a classic combination for endometriosis: both Venus and Mars are debilitated and aspecting each other from the Sign which the other planet rules.

What’s the prognosis for Sarah? I will be coming back to that subject in a future installment. I’ve been writing about the major astrological events of 2019, and the biggest one of those is going to be a whopper for Sarah — although I remain generally optimistic about the long-term prognosis. Stay tuned everyone…

The Astrology Of 2019, Part Two: Saturn Sextile Neptune
archives most recent
More from Beliefnet and our partners
previous posts

(Wondering what the next few months hold in store for you? Write me with your date, time, and place of birth — and send you a free sneak preview!) I had originally planned a long look at the synastry between Queen Elizabeth II and her grand-daughter in law, Meghan Markle. The more I got into […]