Adele At The Grammys: Astrology Of An F-Bomb 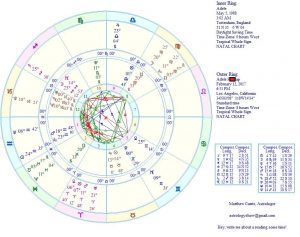 One of the tired-yet-true clichés in astrology is that people with Moon in Sagittarius have a certain dedication to an ideal — a need to “do the right thing.” Another cliché is that they are outspoken, and often don’t care what language they use while being that way. Or, as a Sagittarius like myself might say, “they don’t give a rat’s ass what language they use, they’re just gonna lay the cut straight.”

Adele (born May 5, 1988 in Tottenham, England at (probably) 3:02 AM) has Moon in Sagittarius, and on Sunday evening’s Grammy Awards show, she gave us a double dose of Moon in Sagittarius at its finest, dropping the F Bomb on a live audience of millions around the world after a microphone problem (or was it because she started out singing in the wrong key? Or was it both? It all happened so fast, and even though I was watching I’m not sure).

So Adele “did the right thing,” regardless of appearances or decorum. She swore and started over, because (after all) it was a tribute to the late George Michael (whose death I wrote about HERE). As Adele herself put it at the time, “I can’t mess this up for him.” At the end of the performance, she seemed upset, but the audience loved her all the more for having the integrity to start over. Contrast this with another recent tale of microphone failure and live performance that was handled with significantly less grace, Mariah Carey’s performance on New Year’s Eve.

As far as the evening’s problems for Adele, a lot of it can be blamed on the transiting Moon. At the time of the incident, it was in Virgo, closely square Adele’s natal Moon. That’s the sort of transit that normally an astrologer wouldn’t look at in the course of a reading (it happens twice a month, after all) but transiting Moon square natal Moon is bound to make a person agitated for a stretch of a few hours.

The Moon was also exactly conjunct Adele’s South Node. A lot of astrologers will tell you that the South Node has something to do with “past karma,” and it was at the 2016 Grammys that she also had microphone issues: a microphone fell into the piano and bounced on the strings. Make of this what you will.

Overall though, the transits were more on Adele’s side than against her. The audience loved her performance, and a little under an hour later, she won the award for Song Of The Year, and went on to win Record Of The Year. You go, girl. You f—ing go.

Is Compatibility Always A Good Thing?
archives most recent
More from Beliefnet and our partners
previous posts