The Astrology Of Kanye West’s Breakdown

Okay, I admit it: I’ve been hard on Kanye West before. You probably have been too at one point or another. He’s an easy target. Being “great” at your job is one thing, but if you go around bellowing about how great you are, it almost doesn’t matter if you’re really great or not, does it? Pride goeth before a fall, and after the fall comes the schadenfreude. But, as part of an initiative on my part to be a better person, I’m backing off from my usual snark on the subject of Kanye West to look at the details of his recent emotional breakdown.

Back when I wrote about his chart before, I noted that his Big Ego comes from a strongly-aspected Sun-Jupiter conjunction in Gemini. Transiting Saturn is now opposite that point in his chart (which is a transit that’s difficult for anyone’s Ego). Not helping any? The almost exact quincunx from transiting Pluto to his Sun-Jupiter conjunction… or the fact that transiting Saturn is also square his Moon right now, lending emotional fragility to the mix.

If something big and bad is going to happen to you, it’s likely to have an observable effect on your spouse, so let’s look at Kin Kardashian and her transits at the time Kanye had his breakdown. 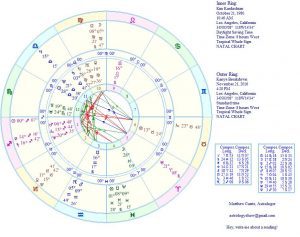 (By the way: I won’t be running Kanye’s chart here. He has a generally-accepted time of birth of 8:45 AM, giving him Cancer rising. That time looks like it works to me, but there is no confirmation, and frankly I don’t recall where I got that time from… although in some circles I am now cited as the “official source” for that time of birth. Neptune has made fools of many of us lately.)

And, holy cow… what lousy transits Kim is having. Transiting Saturn is conjunct her Ascendant (which will bring unwelcome limitations to both her own actions and will have an effect on relationships). That Saturn is also approaching the square to Kim’s natal Venus and the conjunction to her Neptune. Either one of those transits could be a cause for depression or bewilderment — but when you consider that her Venus is the ruler of her Libra Sun, Saturn and Pluto, and that Neptune is the ruler of her Moon, this is going to be an incredibly difficult time. And the news gets worse before it gets better: transiting Saturn will be almost exactly square her Moon (the emotional core of any birth chart) and Jupiter (happiness, and the natural ruler of “marriage”) within a month. That transit will be in effect to one degree or another for about another year yet.