The Astrology Of Star Trek (UPDATED)

(Exciting update at the end of this blog entry!)

Star Trek is celebrating its 50th Anniversary this month. I’ve done a little digging around and have come to two very important conclusions about the astrology involved:

1) The birth charts you see all over the Internet for the premiere of Star Trek are, in fact, incorrect. You can’t always believe the first thing that comes up on Google.
2) Star Trek was born on a great day, astrologically speaking, for science fiction.

Everyone is making a big fuss about September 8th being the 50th anniversary of Star Trek. And yes, September 8th 1966 is when the show first aired in the United States. However, the first episode of Star Trek actually aired two days earlier — September 6th, on the CTV Network in Canada.

(I hereby claim Star Trek on behalf of the people of Canada. William Shatner and James Doohan were Canadian, by the way. So were Leslie Nielson, who was the captain in Forbidden Planet, Lorne Greene, who was Commander Adama from the original Battlestar Galactica and Nathan Fillion, Mal from Firefly. Obviously, if you want your spaceship flown properly, you should hire a Canuck.)

I haven’t been able to confirm that Star Trek first aired at 8 PM — it was somewhere between 7:30 and 8:30 PM –but I’m using that as the most likely “time of birth.” One thing I have been able to confirm is that the easternmost station to run the show (and thus the first TV station on Earth to do so) was in Halifax Nova Scotia. Here is the birth chart for 8 p.m., September 6th 1966, in Halifax: 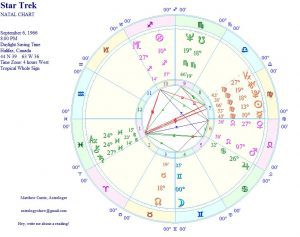 Even if it turns out I am wrong about the time that it aired, all of the chart placements will be pretty close to this.

The original show only lasted for three seasons but led to thirteen movies and spawned four spin-off series… five, if you count Star Trek: Discovery which premieres next year. You can attribute much of Trek’s long-term success to the Jupiter-Saturn trine in the birth chart. This takes on added significance (if I’m right about the time of birth) which would make Jupiter the ruler of the Midheaven.

Star Trek has always had, at its core, a distinct moral perspective going for it. In a time when many Americans felt their world was falling apart, Star Trek offer division where men and women of all races )and even aliens) could work together for the common good. Star Trek was proud to preach a philosophy where even beings from distant planets with completely different perspectives on life could get along peacefully. In the mid-1960s, many people were questioning how much of a future Humanity had. Star Trek was not afraid to say not only do we have a future, we can make it awesome!

Now look at that Uranus-Pluto conjunction, sextile Neptune. Can you think of a higher manifestation of that three planet pile-up than what Star Trek told us was possible? I can’t.

Notice how many placements there are close to the 26 degree mark of their respective Signs? That’s actually incredibly significant in this case, because it illustrates how important minor little details in a birth chart (that even many astrologers don’t know about) can make a huge difference (and yes, I know I’m the guy who is always picking on astrologers for using asteroids too much). I am referring to an obscure point in the Zodiac that most astrologers don’t know or use much: the Galactic Center, which is located at 26 degrees Sagittarius.

The Galactic Center is an obscure point to most astrologers, and admittedly you can do astrology just fine without ever using it. But it is worth noting that the Galactic Center (when strongly aspected in a birth chart) can make for a person with a higher, almost unearthly perspective on life. Over the years I’ve discovered that if one sees a close major aspect between one or more of the personal planets (Sun, Moon, or Mercury through Saturn) you are almost certainly looking at the birth chart of someone who’s a fan of science fiction or fantasy.

Oh, and one more thing? Star Trek is possibly the biggest single influence on my life. So yes, I’m going to be celebrating this anniversary, big time. Join me on the Holodeck for some Saurian Brandy, won’t you?

Heroes Of The Zodiac: Aries

Villains Of The Zodiac: Leo

Villains Of The Zodiac: Virgo

Astrology And The Strange Death Of Anton Yelchin

Thank you Alison from the Halifax Public Library, who had a rummage through The Halifax Chronicle Herald from September 3rd, 1966 and found that “Star Trek” aired on CJCH-TV, Halifax, NS on Tuesday, September 6th at 8:30 pm. Here’s the correct chart: 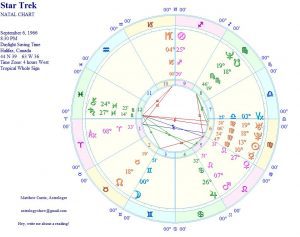 Note that the Midheaven isn’t conjunct the Galactic Center… but the Part Of Fortune is there. No wonder an old forgotten TV show that only lasted three seasons spawned a franchise. Also: Mars in Leo trine an Aries ascendant? If that isn’t “boldly going,” I don’t know what is…

Your Weekly Astrology Forecast (Plus Tasty Panda Meat!)
archives most recent
More from Beliefnet and our partners
previous posts