(This is one of a series in which I try to show you how an astrologer can give you practical understanding that gets practical results. We all need a bit of that sometimes, don’t we?)

“Am I naturally someone who is meant to be single? I am curious as am always dating but really like being alone, its a hard contradiction to manage.”

Man, things are a lot more complicated than they used to be, aren’t they? Once upon a time relationship options were a lot simpler.

-If you are heterosexual: get married young and start reproducing as soon as possible.

-If you are not heterosexual: ACT hetero, get married young and start reproducing as soon as possible.

Things aren’t nearly that straightforward in our world of late, and overall I figure that’s a good thing. The problem of course is that this leaves most of us lacking for guidance as to what or who we should be involved with, and what that involvement should look like.  Don’t worry though, FN… I figure you’re going to be just fine.

Here’s your chart, FN. If it looks different from what you’re used to looking at, remember that I use Whole Sign Houses. All the major placements are the same, though. 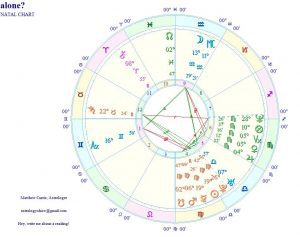 At this point, those of you who know a bit about astrology are probably saying “but what about Venus and Mars and the Eighth House? What about sex?” To which I can only say “thanks, but I’m busy writing a blog entry.”

Seriously though: there are lots of people who have sex without a relationship, and lots of people in relationships who aren’t having sex. If you’re even considering a relationship with someone, you already know whether or not you’re attracted to that person. We’re talking about you and your needs in a relationship. Sex is much more a different subject than many realize (or want to think about).

Your Fifth House is in interesting shape. On the one hand, Uranus (which is always a little weird and unpredictable) in that House indicates you’re probably fun to date, and you’re looking for something unique or different in a partner relative to what others might be seeking. Sure, “tall dark and handsome” is great, but “tall dark and handsome and a little weird (by most people’s standards)” probably works even better for you. Complicating this is the position of the Fifth House ruler, which in your case is Venus. Uranus may be a little odd, a little flaky even… but Venus in Scorpio is intense. You might like to keep things light at first, but once you’ve found someone or something you want. you’re going to latch onto it fiercely.

Getting that fish into the boat is one thing, but keeping it there is another. That’s where the Seventh House comes into play. You have Sagittarius on the Seventh House cusp. Sagittarius may not have the reputation for being the most faithful and committed of the Signs (and as a Sagittarius I protest this stereotype), but when a Sagittarius has a mechanism into which he or she can pour their ideals, they are committed as heck. Like, kamikazi-level committed. Its ruler is Jupiter, and yours is in Scorpio, so that goes double for you. And yes, I know there are no planets in your Seventh House, but “no planets” never means “no news.”

Most importantly: the ruler of your Fifth and Seventh Houses are conjunct. So, if you’ve given up on the idea that you’ll ever have a good, lasting, committed relationship, fear not. You may have given up on that idea… but The Universe hasn’t. And if there’s one thing an astrologer can tell you, it’s this: The Universe usually gets its way with things.