Saturn Square Neptune: The Astrology Of The San Bernardino Shootings 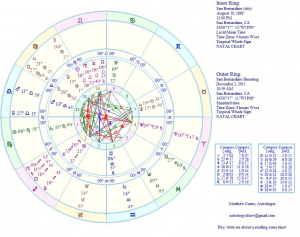 Astrology, like any decent science or philosophy, answers a lot of questions and raises new ones. Yesterday’s mass shooting in San Bernardo has me asking even more new questions.

As was the case with the rioting in Ferguson Missouri, we can see something was about to snap just by the inception date for the city and the transits happening at the time. In the case of San Bernardino, we can see that the city has Mars sextile Saturn in its birth chart. That’s not normally a violent aspect, but San Bernardino is having its Saturn Return and it Mars Return at the same time now… a rare confluence that when combined with the natal sextile indicates “ease of violent expression made easier by circumstances.” We don’t have birth data for the shooters, Syed Farook and his wife Tashfeen Malik yet, but undoubtedly when we do it will likely tell us the same tale we see again and again.

The Saturn-Neptune square happening now is clear a big player in all this, and not just because of its obvious effect on San Bernardino’s Saturn. America, still shaking in fear at the recent Paris attacks and never recovered from the trauma of 9/11, has been leaping to various contradictory conclusions with even more of the usual fervor than usual. Yes, the attackers were Muslim… but it appears this was more of a workplace shooting than anything else, and that’s hardly the standard terrorist modus operandi. Does this mean America shouldn’t let in any Syrian refugees? Not if you consider that one attacker was born and raised in the US, and the other came from Pakistan — which is supposedly an ally in “The War On Terror” (except when it isn’t). You know, just like Saudi Arabia… that place Osama bin Laden was born… is America’s biggest ally in the region. Maybe their religion was to blame… except to believe that is to ignore the history of all other religions. Maybe it’s religion in general… except have you ever heard of Mao Zedong?

Maybe stronger gun control could prevent this sort of thing, but let’s be honest: when there is one gun for everyone in the United States, how do you do that… especially when gun ownership is concentrated among a small subset of citizens, many of whom feel they need those guns because the Government might try to take them away?

Welcome to the confusion of Saturn square Neptune.

Regardless of the facts we still don’t have, I can tell you The Truth about why this happened, and it has everything and nothing to do with astrology. The Truth? The truth is that there are places in the human heart that are darker than the night side of Pluto, and sometimes that darkness reaches out and swallows many, many lights.

Sometimes astrology gives us the power to foresee the worst and to prevent it. Sometimes it gives us the keen insight to stand above it all and see how it happened, like a falcon circling a battlefield — its sharp eyes seeing every last corpse but affecting nothing.

How can peace win when we won’t let go of the war inside of us?

When the dust of peace has settled on a nation,
how will human arms handle the death of weapons?
And what of ears, are ears so tuned to sirens
that the closing of wings causes a tremor?