Planetary Friends And Enemies: An Introduction 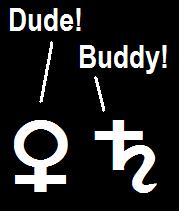 What I practice and write about is referred to as “Western Astrology.” There are other forms of astrology, most notably Vedic Astrology… the form of astrology which comes India. Vedic Astrology is incredibly powerful and accurate and I look forward to many more years of studying it.

You have to be really, really, really careful when it comes to using Vedic techniques with a Western reading, or vice versa. They are two very different creatures, and even the apparent similarities can be deceptive. It’s like mixing English and Spanish: sometimes knowing one helps with the other, but often it can do more harm than good. Like if you say “yo soy embarazada” thinking it means “I am embarrassed”… whereas it actually means “I am pregnant” (which, come to think of it, would be a pretty embarrassing mistake to make).

One of the most useful concepts I’ve encountered in Vedic astrology that transplants surprisingly well into Western terms is the notion of planetary friends and enemies.

It figures that since each planet rules different things, that each planet could, in essence, have a “personality.” Personalities get along with other personalities with varying degrees of effectiveness, as anyone who has worked in a large office can tell you. You can read even more into a birth chart based on the aspects between planets: in other words, if you have Moon square Mercury in your chart, all else being equal, they don’t “get along with each other” as well as if it was Moon trine Mercury, for example.

In Vedic astrology, the planets have friends and enemies. Think of it this way: If person X likes person Y, then person X will get along better with Y in a stressful situation, whereas X might resent Z for having even been invited to the party in the first place.

Here’s a listing of friends and enemies for each planet. Make sure you use this to plan the seating arrangement at your next cosmic dinner party.

You may notice some quirks here, as there always are at a good dinner party… like, for example, The Moon is an enemy to Saturn, but Saturn isn’t an enemy to the Moon. In fact, the Moon is so welcome he has no enemies. Obviously, the Moon must have brought the wine to this soirée…

I know this looks unnecessarily complex and scary (welcome to Vedic astrology!). Don’t worry, you don’t have to memorize it. But next time you’re mulling over your birth chart or someone else’s, have a look at this table. I’ve found it can be of great value in interpreting the aspects in a Western chart. If a trine is so “good” then why is Fred’s Mercury-Mars trine giving him high blood pressure? Why does Mindy get so many dates, despite her Venus-Saturn square? And why do so many people with any Venus-Jupiter aspect (even the good ones) turn out to be diabetic?

I would never let the planetary friend/enemy concept completely overrule an obviously good or bad aspect in a chart. But I find that it adds some valuable flavor to an interpretation. In my case, I have a Moon-Mars opposition that’s never been as problematic as I’ve been told to expect. On the other hand, that Sun-Saturn square of mine… yeesh.

Try it yourself next time you’re pondering your favorite natal chart. It works!