Ask An Astrologer: Am I That Bad?

TG writes: “I had an astrological report done when I was 18 – I’m now 41. Parts of that report have stuck with me all my life and I feel like they are holding me back. What I don’t know is if the charts was for the rest of my life or just a few years.”

First of all: Whether it was the intentional result of astrological malpractice with malice aforethought, or a badly-worded computer-generated personality profile, or anything in between — my apologies. First and foremost, astrology is meant to inform and empower, not to berate you and make you feel bad.

I myself am a male, a Type O Negative blood donor, an astrologer, a Star Trek fan, a writer, a terrible dancer, a counselor, an insomniac, a Canadian, a primate, an acrophobic, and a human… and often, I am several of these things at once, but I don’t necessarily define myself by any one of these things, or any combination of them, at any given time.

I was generally well behaved as a kid, but I remember one time in about Grade Six where the teacher had to leave for about fifteen minutes and, as happens on occasion, the classroom quickly devolved into a scene from a badly-run primate enclosure. I wasn’t exactly the instigator of this situation, but… well, In the words of Billy Crystal: “I was the class comedian as opposed to the class clown. The difference is, the class clown is the guy who drops his pants at the football game, the class comedian is the guy who talked him into it.”

I got a large portion of the blame for the outbreak of bad behavior, and the teacher — thoroughly enraged upon his return — tore a strip off of several of us, but I got the worst of it. He said some things that stuck with me for a number of years and had an effect on me. That’s one of the problems with authority figures that you’d normally respect and believe: they can have a bad day and say cutting things just like any other human. Years later I came to the conclusion that the statements that teacher made about me were ultimately not true… or at the very least, were not defining marks of my character. They were, at best, indications of qualities I had that could potentially get out of hand if I let them. That, and of course, I was a brat at the time, as were we all at that age.

I imagine my life could have turned out much worse than it had if I had taken that teacher’s opinions more to heart, or had clung to them for longer. And don’t get me wrong — overall this was a good guy.

I have a fairly well-regarded astrological software package that I use to do my chart calculations with. Like most such software packages it also comes with a personality profile feature that lists off the pros and cons of my personality. It does a fairly good job of delineating what a person is like, as these things go, but it can’t do the same job of interpreting a chart as a real, live astrologer could. But even knowing that, there’s something about a computerized report that can pack a punch, and not in a good way. Here are a couple of gems from my own birth chart:

Sun Square Pluto: You are intensely willful, zealous, and fanatical, though often you hide the intensity of your feelings and your personal motives and desires. You have an infatuation with power and an almost compulsive desire for personal recognition, the desire to be Somebody.

Moon Opposition Mars: You are temperamental and impatient and can be very difficult to live with. You tend to respond with a temper tantrum (overt or subtle) if your desires are frustrated. You become very irritable and bad tempered if you do not have enough vigorous physical activities or other outlets for your aggressive, feisty spirit.

Ouch. Clearly, this is a terrible person who no one in their right mind would want to hang out with. That is, unless you keep in mind the positive traits in my birth chart, or that the negative qualities delineated above also have positive uses, like driving me to do my job better.
Helping you understand the strengths and potentials of your birth chart… potential problems included… is probably the single most useful thing an astrologer can do for you. But whether you’re taking the opinion of an astrologer or a teacher or an authority figure or your mate: be aware of yourself, no matter who you are. Know your strengths, and find a way to make your weaknesses into strengths too.

It’s also useful to keep in mind that although you are the same person you were when you were born, you aren’t, really. You have grown and learned to walk and feed yourself and make changes to make your life better. Astrology has a technique called secondary progressions that reflect this. You may have been told that this or that placement in your birth chart was a problem… but by now, in a sense, it has moved.

That, and: Mr. Abraham, if you’re out there, I forgive you. 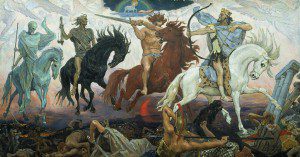 The Astrology Of Ragnarok: Let's All Panic About The Cardinal Grand Cross!
archives most recent
More from Beliefnet and our partners
previous posts