Your Lunar Eclipse Forecast, October 2013: When The Bugs Come In 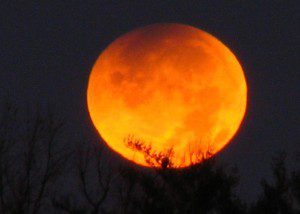 A Full Moon is prime time to bring out The Crazy in people, and this week’s Full Moon is also a Lunar Eclipse: an extra-special Full Moon with an bonus scoop of neurosis. In many parts of the world, this is the time of year when the weather gets colder, and bugs that would normally stay outside come sneaking into the house looking for a warmer place to hang out.

One of the greatest sages of modern times — an exterminator who was in my home a couple of weeks ago — recounted his experiences with people who have become bug-o-phobes. He noted how easy it is for some people who have lived through an infestation (or those who simply worry about these things) can suddenly be filled with panic every time they get a simple itch. It even happened to him once. There are two ways to react to this: either make yourself nuts and spend money you don’t need to spend on an exterminator… or face the simple mathematical truth that no, your home probably isn’t crawling with West Nigerian Jumping Scabies, or whatever it is you fear most.

For many of you, this Lunar Eclipse will see an outbreak of West Nigerian Jumping Scabies Paranoia of epic proportions.

A Lunar Eclipse is also a Full Moon. You don’t need to be an astrologer to have heard about what a Full Moon does: it sets the nerves on edge and makes the potential for werewolf attacks … figuratively speaking of course… much greater. A Lunar Eclipse makes a Full Moon’s effects more powerful, and leaves an impression on the birth chart that can be triggered weeks or months later. If you know the details of your birth chart, find the Houses where 26 degrees Aries and Libra fall, and you can expect things to come a bit unglued in those areas of your life.

This Eclipse has particular bite to it, thanks to Mars entering Virgo. Mars is where and how we invest our drives, and in a Mercury-ruled Sign like Virgo, that focus often falls upon intellectual pursuits… or perhaps upon worries that exist primarily in the mind. The experts will tell you it’s a good time to do house-cleaning, organizing, and all of the cleanly logical maintenance that needs to be done occasionally. That’s generally true, but this Mars comes with a special warning in the next week or so: you may be imagining Dust Bunnies that aren’t really there. Mars is now opposite Neptune, and your judgement as to where the real issues are can be clouded. The slow grinding of the Uranus-Pluto square is crawling towards being exact once more, and that in and of itself is enough to make a person sweat bullets over imagined fears based on otherwise real issues.

If you don’t believe me, go ahead and cruise through your Facebook friends comments about the current US Government shutdown. How many of them are yelling about national parks and monuments being closed, but show no signs of concern that food inspection and weather services and airline safety personnel aren’t on the job?

Of course, maybe I’m just worried about the wrong things too. Go ahead, have another cheeseburger while you wait for your flight to board. I’m sure it’ll be safe.

This forecast applies to everyone in general, but will have specific effects based on when you were born:

If You Were Born:

In the first week of the Earth or Water Signs: The urge to get things done will face particular frustrations. Avoid the urge to apply too much force to the situation.
In the last week of the Fire or Air Signs: The people around you don’t really mean to be jerks, and neither do you. Forgive, forget, and put down that machete.
March-August 1955: Prepare to have some illusions stripped away. The limitations that are revealed may bother you, but they can be addressed.
January-March 1961: Frustrations with finances and your general sense of order come to a head. Be careful where and how you invest you cash and your emotions.
October-November 1981: A major change in how you view your place in the world is called for, and may get dropped in your lap.
October-December 1982: The things you take most seriously in life are going to be challenged. Be brave, and this too shall pass.
December 1996-January 1997: You know that idea that “you create your own reality”? Well, this month someone else’s reality will be invading your mental space.

If you are Miley Cyrus, or born late November 1992:

This Eclipse is closely square your Mars in late Cancer. Be careful who you lash out at, where you lash out at, and where and how you invest your sexuality. More on Miley and Sinead O’Connor’s astrology HERE and HERE.

If you are Kanye West:

The Eclipse happens close to Kim Kardashian’s Sun. Expect her ego demands to go through the roof in the next year… perhaps even eclipsing yours, if you can imagine such a thing. Maybe that will be a reaction to her Mom’s divorce. More on the astrology of Kanye West HERE.

Astrology Of Love And Compatibility: Leo
archives most recent
More from Beliefnet and our partners
previous posts