The Astrology Of Miley Vs. Sinead, Round Two: Sinister Synastry 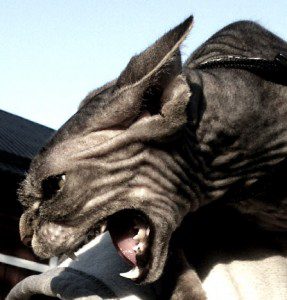 In Part One of my coverage of the Celebrity Battle Of The Century (this week at least) I discussed how two very similar astrological transits separated by over a decade managed to bring both Miley Cyrus and Sinead O’Connor a lot of (largely negative) publicity: Sinead with her Saturday Night Live protest against The Catholic Church, and Miley with her strongly-expressed objection to wearing clothing in public. They’re both Sagittarius and they’re both women in the Music Industry, so you might well expect that if we were to lock them in the same room together, they’d get along just fine.

In astrology, when we compare the birth charts of two people for purposes of compatibility, we call it “synastry.” Astrologers usually look at this within the context of romantic relationships, but the same basic rules apply for romance, or for the parent/child relationship, or employee/boss interactions, or celebrities shouting at each other across the gulf of the Internet. The synastry between Miley Cyrus and Sinead O’Connor is (not surprisingly) no prize-winner, and whether they had met at an awards show or a buffet table or a pool hall, things weren’t likely to stay friendly between them for long at all.

First of all, the Sun Signs. They are both Sagittarians. That implies there will be commonalities, but their Suns have a lot of distance between them: Miley’s is at one degree Sagittarius, and Sinead’s is at 16 degrees. That’s half a Sign, and that doesn’t really count for much. In fact, the only major aspect Sinead’s Sun performs to anything in Miley’s chart is a sextile (60 degree separation) to Miley’s Saturn. This indicates about enough ability for the two of them to potentially work together through adversity… perhaps long enough to find the emergency exit in a plane crash together, let’s say.

The Sun may be a person’s Ego, but the Moon is that person’s Emotional Core. It’s the place where gut reactions and instinctive bonding come from. Miley’s Moon is at 20 degrees Scorpio, conjunct Pluto (which they say brings a certain fascination with sex and breaking taboos — go figure!). That placement plays into Sinead’s chart in a very interesting way: it’s right on top of her Mercury and Neptune, and plays well into Sinead’s Saturn, Uranus and Pluto as well. Normally an astrologer would look at these as being positive things in a relationship, but Neptune is a bit of a wild card. Someone’s Moon conjunct your Neptune will tend to make you all fuzzy and unrealistic about them on some level. In romance, it can be warm and wonderful and fantastic. It can also make you delusional about that person’s emotional core… making you think all kinds of crazy things like “I can share my wisdom with her about not ruining her career by acting like such a tart in public, and she’ll listen and appreciate it” when in fact such behavior may have been intended as a powerful message of female empowerment.

That is what “twerking” is all about, isn’t it? Female empowerment? (shrug) That’s what I’ve heard, anyway.

Mars in a birth charts rules anger, aggression, and annoyance. You don’t need to be a Master Astrologer to see where that’s going in this case, but here are the details:

Both Miley and Sinead have what are often considered to be difficult Mars placements. Miley’s is in Cancer, which tends to make a person not know where or how to direct their anger (or sex drive, for that matter). Sinead’s Mars is in Libra, and The Planet Of War in The Sign Of The Peacekeeper can make for some awkward expressions of rage. The only aspect Sinead’s Mars gets in her birth chart is a sextile from Jupiter. Jupiter turns the volume up on any planet it aspects, and with nothing else in the chart holding that Mars back, it can make for some fierce and unexpected aggression. Meanwhile, Miley’s Mars gets a supportive trine (120 degree separation) from her Moon, Mercury, and Pluto… which is a whole lot of potential energy (and anger) waiting to spring loose.

These two are unlikely to ever get along too well for very long in future, even though Sinead has already said she’s dropping the matter. Hopefully Miley will let it go too.

Often, the aspects between two people that attract can also aggravate. Some relationships appear to be built more on mutual hostility than admiration. The connections between two birth charts that draw them together can sometimes also result in conflict. That’s why so many people turn to astrologers for advice with their personal relationships: it provides a valuable outside perspective.

So, Miley and Sinead, let me put on my Cranky Old Sagittarius Astrologer Hat and give you both a bit of my wise counsel:

Miley: It’s easy for a young woman to get attention by sexing it up… it always has been and it always will be. As much as I appreciated that sort of thing back when I was a young man (and there was this brazen hussy named Madonna running around shocking everyone… but I digress) I eventually came to realize that regardless of one’s gender, ultimately substance usually wins the day (and ultimately, sells more tunes and wins more fans) than going for the easy sale. You really should take Sinead’s advice. She’s been there.

And, Sinead? You are absolutely right. Music publicists and record company executives are ruining the world by talking young women into doing things they normally wouldn’t conceive of…

“The young people of today think of nothing but themselves. They have no reverence for parents or old age. They are impatient of all restraint. They talk as if they knew everything, and what passes for wisdom with us is foolishness with them. As for the girls, they are forward, immodest and unladylike in speech, behavior and dress.”

…Just like Peter The Hermit said, back in 1274 AD. We can only be thankful that the Twerkpocalypse is not upon us just yet.

The Astrology Of Miley Vs. Sinead: When Sagittarius Attacks!
archives most recent
More from Beliefnet and our partners
previous posts