As candidates campaign across California ahead of the recall election on September 14th, faith communities have become a hub for reaching potential voters. Religion has played a major role on the campaign trail in recent weeks as concerns have grown over California’s COVID-19 restrictions, which greatly limited in-person worship.

When looking at all the candidates, it appears that Larry Elder has made the most concerted effort to win over faith communities, the LA Times reports. Supported by friend and devoted advocate Jack Hibbs of Calvary Chapel Chino Hills, Elder has had the support of evangelicals at megachurches throughout California.

One of the earliest contributions to the recall effort came from Orange Country donor John Kruger through his company Prov 3:9. The contribution of $500,000 was made because they believed Gavin Newsom’s executive actions not only restricted in-person religious assembly but also violated the U.S. Constitution, according to a company representative.

“Many people of faith feel like the government has been overreaching and interfering with really the first freedom of our country, which is the right to gather and to worship and to practice your faith without any interference of any bureaucrat or any political authority,” said Assemblyman Kevin Kiley, one of the Republican recall candidates. “I think that’s similar in some sense to how people have felt when it comes to the role of government in a lot of other ways.”

The U.S. Supreme Court ruled in February that California couldn’t ban indoor services during the pandemic.

At Destiny Christian Church, Elder was asked by pastor Greg Fairrington if he would ever use executive power to limit religious freedom. The church held in-person worship in defiance of the governor’s orders.

“Of course not,” Elder said, a response to which he received applause. He addressed other issues important to conservative voters, including standing up for religious values, Roe vs. Wade being overturned and returning governing of abortion to states. The audience cheered and applauded.

“I think the whole congregation was like ecstatic to receive somebody in that’s such an opposition of what we have had these last four, eight, 10 years. It’s incredible,” said Monica D’Angelo, a church newcomer. “We need to have a fresh start in this country and in this state especially.”

Elder isn’t the only candidate who is making these appeals. Kiley addressed church audiences in a line of church visits, including an appearance at Godspeak Calvary Chapel Thousand Oaks. This church has a history of welcoming candidates to speak to members, said pastor and former Thousand Oaks councilman Rob McCoy.

UC Santa Barbara religious studies assistant professor Joseph Blankholm says that even if religious leaders don’t explicitly tell congregants how to vote, churches and other faith institutions can have enormous sway on how leaders speak about political issues.

Do you think churches have a big influence on elections and how congregants vote? Share your thoughts in the comments. 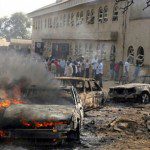