The belief that Donald Trump was a Messiah ran rampant during his time in office. While many Evangelicals supported Trump because they believed he shared the same politics and values, some supported him because they thought he was a Messiah. They saw Trump as infallible and became his disciples.

Pastor Franz Gerber was worried that many members of his congregation appeared to idolize Trump more than they worshipped Jesus.

The Praise Chapel Community Church pastor voted for Trump in the 2016 presidential election. Rural Forest county, Wisconsin, the area where he serves as pastor, swung heavily for Barack Obama to Trump his first term, helping to put the former president in the White House.

Gerber expressed regrets about his vote, but what disturbed him the most was an unquestioning and aggressive reverence for Trump within his congregation.

“It seems like there are many evangelical Christians that are willing to die on the hill of supporting the Republican president, supporting Donald J. Trump, And to me, that hill is not worth dying on. No matter who the candidate is, no matter who the individual is,” Gerber said. “To put all your hope into that individual is a dangerous road. Scripture would warn us against that.”

Bobby Azarian, Ph.D., a cognitive neuroscientist and science writer, did research on the science underlying Trump’s support during his presidential campaign bid. Through comments, emails, and discussion forums, he learned that a good number of his supporters believed the president was an answer to their prayers.

“He is regarded as something of a messiah, sent by God to protect a Christian nation,” Azarian said.

“Nothing good can come from putting any single person on a spiritual pedestal. No one is infallible, no one is free from bias, and no one is honest all of the time, no matter how hard they may strive,” Azarian said. “This goes for Republicans, Democrats, Popes, and Dalai Lamas. Because of this fact of human nature, we must always scrutinize our leaders and always question their decisions and motivations.”

“What makes a good president is the ability to survive our constant scrutiny and the scrutiny of the free press. Through this process, which is critical, we can get a better sense of whether a politician is trying their best, and whether or not they generally have Americans’ best interests in mind,” he said.

Many questioned the hypocrisy of evangelicals who insisted that Trump’s morality was nobody’s business but God while also casting great judgment on non-believers or those who don’t believe as they do. They also questioned supporting a man who spent more time putting others down than lifting them up.

Many Evangelicals believed that it was prophesied that Trump would serve as president and be elected for a second term. They also believed he was fulfilling God’s Will on earth. 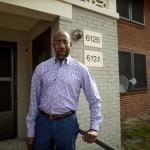