Mississippi Removes Confederate Emblem on State Flag, Replaces With “In God We Trust”

Last week, Mississippi lawmakers voted to remove the Confederate battle emblem from their state flag more than a century after the South lost the Civil War. Mississippi is the last state flag to have made changes due to harmful, racist symbols.

Mississippi, with a population that is 38 percent Black, felt mounting pressure to change their flag after weeks of protests surrounding racial injustice in across the United States. Confederate statues and monuments have most recently been targeted for removal.

Legislators and spectators on both sides of the political aisle cheered at the decision. The House passed the bill 91-23 Sunday afternoon. Within hours, the Senate followed suit, 37-14. Democratic Rep. Robert Johnson of Natchez choked back tears as he told reporters that he has seen white colleagues develop more empathy about how the Confederate symbol is painful to him and other African Americans.

“They began to understand and feel the same thing that I’ve been feeling for 61 years of my life,” Johnson said.

A commission will design a new flag that cannot include the Confederate symbol and that must have the words “In God We Trust.” Voters will be asked to approve the new design in the Nov. 3 election. If they reject it, the commission will set a different design using the same guidelines for voters to decide on later.

Attorney General Lynn Fitch said putting the religious phrase on the flag would “reflect the love, compassion and conviction of our people.”

Vicksburg Mayor George Flaggs and Governor Phil Bryant both endorse a flag that contains the state seal. In a statement, Flaggs said: “I join former Mississippi Governor Phil Bryant, United States Senator Roger Wicker and a host of others who have endorsed the red, white and blue ‘In God We Trust’ flag for the State of Mississippi. I believe this flag option will bring our state together like never before and continue the forward momentum we’ve seen in recent days. This is an exciting time for our state. We’ve now shown the Nation what it means to be Mississippians, and I continue to believe our best days are ahead of us.”

Republican House Speaker Philip Gunn, who is white, has pushed for five years to change the flag, saying the Confederate symbol is offensive.

“How sweet it is to celebrate this on the Lord’s day,” Gunn said. “Many prayed to Him to bring us to this day. He has answered.”

Religious groups, including the large and influential Mississippi Baptist Convention, said erasing the rebel emblem from the state flag is a moral imperative. 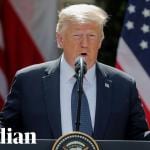