Earlier this year, Democrat Alexandria Ocasio-Cortez of New York spoke up about her personal faith in a hearing, citing that Jesus Christ would be maligned in our current Congress. She believes some members are using religious freedom as a way to defend “bigotry and discrimination”.

The hearing on LGBTQ rights was organized to “examine the Administration’s actions to erode LGBTQ rights in multiple areas, including healthcare, employment, adoption, and foster care.” Witnesses like Evan Minton, a transgender male, spoke at the hearing. Minton is suing a Catholic hospital for not providing a hysterectomy.

“I cannot, it’s very difficult to sit here and listen to arguments in the long history in this country of using scripture and weaponizing and abusing scripture to justify bigotry,” she said. “White supremacists have done it, those who justified slavery did it, those who fought against integration did it, and we’re seeing it today.”

The congresswoman then went on to suggest that her colleagues would go as far as driving Jesus Christ out of Congress.

“Sometimes, especially this body, I feel as though if Christ himself walked through these doors and said what he said thousands of years ago, that we should love our neighbor and our enemy, that we should welcome the stranger, fight for the least of us … he would be maligned as a radical and rejected from these doors.”

Toward the end of her remarks, AOC said she was “tired of communities of faith being weaponized and being mischaracterized because the only time religious freedom is invoked is in the name of bigotry and discrimination. I’m tired of it,”

AOC has said previously that she is a Catholic, but many Evangelicals question her faith due to her beliefs on abortion, same-sex marriage, etc. which don’t align with church values. 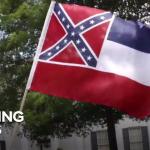 Mississippi Removes Confederate Emblem on State Flag, Replaces With "In God We Trust"
archives most recent
More from Beliefnet and our partners
previous posts