No, this is not like any game show you’ve ever seen. The contestants pray. A Gospel choir breaks into hallelujahs at commercial breaks. The host, comedian Jeff Foxworthy quips “You know, if your church is also a skating rink, you just might be a redneck.”

In the premiere episode of the American Bible Challenge, airing Thursday night, August 23 at 8 p.m. EDT, on the Games Show Network, the first three teams of 18 is introduced – and go head-to-head in competition for $20,000 that the competitors don’t even get to keep.

Thursday night, viewers will meet “The Suburban Saints,” from Sacramento, California – whose members include local deputy sheriff Ron Milton, insurance salesman Ned Schaut and TV/film producer Rick Borba. What do they have in common? They are Bible study buddies.  Ron is a Purple Heart Iraq War vet who volunteers in prison ministry; Ned wants to build a skate park to minister to teens; and Ricky hopes to make films and TV shows reflecting Christian values – but without any sermons. If they win this round, they will earn $20,000 for City Crossroads, a non-profit serving the Sacramento community.

They’re squaring off against “Team Gospel Geezers,” three gray-haired golfing buddies from Charlotte, North Carolina: Retired firefighter captain Roger Tench, realtor Bill Henderson and Chris Kidd, a nuclear security maintenance specialist. All three have been devoted Christians for decades and found their faith put to the test in different ways, including when Roger’s wife was diagnosed with cancer and the time Bill felt God wanted him to serve his community during the housing crisis by selling homes without a commission. Their charity? Samaritan’s Purse, a ministry founded by Billy Graham’s son, Franklin — which provides emergency relief in disaster and poverty areas worldwide.

Next, the show introduces “Team Minnie’s Food Pantry,” from Plano, Texas. This squad consists of a Dallas-area storefront charity ‘s volunteer staff. Their pantry gives away food to local families in need. Team members include stay-at-home mom Lanett Patt, pantry director Cheryl Jackson and businesswoman Lynette Shofner. The latter two are sisters – preacher’s kids – and the pantry is named after their mom.  Sister-in-law Lanett also helps Lynette with the related Sisters of Savings, a food coupon project that encourages locals to donate food to the pantry.

In the opening moments of the show, the Sacramento crew ace every question about Noah’s Ark – beating the Geezers and the Pantry gals at the buzzer, answering some pretty easy questions with almost a snicker. Gee, aren’t there any tough questions on this show? Well, just wait and see.

But what is going on here? Is a game show based on Bible trivia going to fly in these politically correct times? Well, reasoned the corporate bigwigs at Sony and GSN, why not create a game show based on the bestselling book of all time? After all, more copies of the Bible are in print than any other written work. According to the New York Times, more than 40,000 Bibles are sold daily. Its sales numbers vastly exceed those of even the most popular novels.

And Americans love game shows. In its 25th season, Wheel of Fortune draws record audiences year after year. The Price Is Right is in its 39th year. And for as long as anybody can remember, Americans have shouted Jeopardy questions at their TV screens. So, why not a game show based on the world’s bestselling book?

GSN believes the Bible is about to deliver the next Deal or No Deal. They’re going after a vast, untapped market – those millions of viewers who can recite the all names of the ancient kings of Israel, can recite the major events in each chapter of the Book of Exodus, and without blinking can tell you where Mount Ararat – the final resting place of Noah’s Ark – is located.

“Eastern Turkey,” deadpanned contestant Schaut without even pausing to think – and that question wasn’t even part of the competition, just a query Foxworthy tossed out in passing.

The first episode is a fun time, guaranteed to appeal to anybody who grew up in Sunday school, children’s church, Wednesday night youth group or any church camp that had “Bible Bowl,” “Bible Trivia” and “Sword Drill” contests. What kind of white bird brought Noah an olive twig – signifying the great flood was receding? Even non-Bible scholars have a pretty good idea of that one.

“A good game show can last for many, many, many decades,” says network executive Bob Boden. GSN is hoping the American Bible Challenge will do just that – catching the American TV viewer’s vision for what TV could be. No sexual innuendoes, no embarrassing language, no leering host – just good fun with good people who know it was Abraham who was willing to sacrifice his son on Mount Moriah, and that the false prophets of Baal lost humiliatingly to the Prophet Elijah on Mount Carmel.

“The Bible is the most popular book of all time,” says GSN’s David Schiff, senior vice president of programming and development. “There’s no denying that it has an incredibly continuing relevance in hundreds of millions of lives. We believe it is perfectly acceptable for us to take that material and those facts and turn it into a game. We’re excited about this, and we have the ultimate confidence that this is going to be a really well-received series.”

This is no 1950s Bible bowl. Thursday night, Foxworthy keeps the pace moving with increasingly difficult Bible questions that somehow include Facebook, YouTube and even the Lord of the Rings.

In episodes to come, the 18 teams from all over America will compete to advance to the semi-finals – each week earning $20,000 for the winning team’s charity. In the season-ending finals, one squad will triumph over all – putting $100,000 into the offering plate of their favorite cause.

The program airs weekly on GSN cable network, which offers original and classic game programming and competitive entertainment via its 75-million subscriber television network and online game sites. That’s right, you can also play on line. Tune in to find out how. 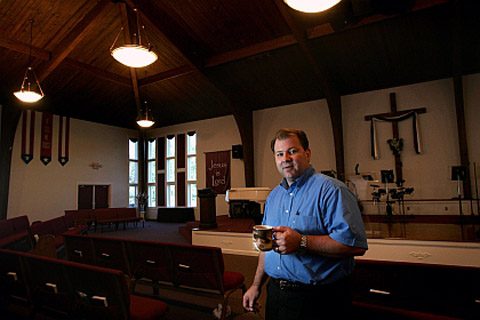 Should worshipers be allowed to arm themselves?
archives most recent
More from Beliefnet and our partners
previous posts