Is that the American Bible Society playing Facebook games? With Jeff Foxworthy?

Game shows? Facebook? What’s next — Twitter? Society officials shrug off misconceptions that the Society is too straight-laced to even know what Facebook is, much less recognize the opportunities that social marketing bring to distributing the Holy Bible. And, by the way, they are on Twitter — sending inspirational Bible quotes to thousands of followers several times a day.

Founded in 1816 in New York City, the society has been guided by such notables as U.S. Presidents John Quincy Adams, Rutherford B. Hayes and Benjamin Harrison, Star Spangled Banner composer Francis Scott Key, Last of the Mohicans author  James Fennimore Cooper and the first Chief Justice of the U.S. Supreme Court, John Jay. The Society’s first president was Elias Boudinot, president of the Continental Congress before George Washington’s inauguration.

According to some accounts, Thomas Jefferson prepared his abridged version of the New Testament as an American Bible Society tract to be translated into Native American languages.

The society says their entire history has required adaptation to the times over the last two centuries, providing free Bibles to hotels, giving pocket Bibles to soldiers and providing Bibles in Braille to the blind. By 1912, the society had given away millions of Bibles in 83 languages spoken within U.S. borders. More recently, society volunteers gave more than one million Bibles free of charge to those affected by the September 11, 2001, terrorist attacks. Upon the urging of President Jimmy Carter, the society gives free Bibles to Habitat for Humanity for each of its new homeowners.

An overwhelming majority of Americans – 85 percent – have a Bible in their homes. But with the premiere of Foxworthy’s new game show, their knowledge of what the New York Times says is the best-selling book of all time will be put to the test in prime time.

“The American Bible Challenge app is designed to be a lot of fun. But I think people who play will discover just how much they really know about the most famous book of all time,” said Geoffrey Morin, the society’s chief communications officer. “In the American Bible Society’s State of the Bible survey earlier this year, 79 percent of people surveyed said they believe they are knowledgeable about the Bible, but only 46 percent were able to correctly identify the first five books of the Bible. So clearly there’s a disconnect.”

Whether Foxworthy’s game show contestants win big (actually, on camera they have to put all their winnings into the offering plate of the charity of their choice) or head home chagrined, Morin says that the very existence of the American Bible Challenge is a good thing for America. “From poverty to politics, environment to ethics, revolution to romance, the Bible has always addressed society’s most pressing issues. A TV show centered on Bible knowledge speaks to the enduring relevance of the Bible in our everyday lives.”

The society says that it exists “to make the Bible available to every person in a language and format each can understand and afford, so all people may experience its life-changing message.” 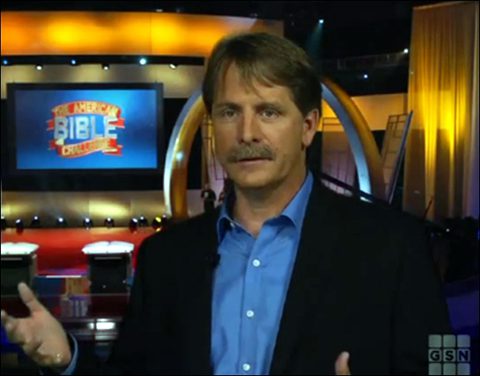