Officials have decided to forbid British schoolchildren from having best friends. The government says it will back a ban on employees wearing crucifixes or any other Christian symbol. A court says UK churches will be forced to marry homosexual couples regardless of church law.

And London mayoral candidate Ken Livingstone has vowed to make the city a “beacon of Islam.”

Another British judge has ruled that a Christian who was demoted at work for posting private comments on his personal Facebook page defending Christian morality cannot defend himself claiming freedom of religion or protection under human rights laws.

And a large Russian company has announced that because of British “persecution of Christians,” it is cancelling all orders for British products – and will stop doing business with the United Kingdom.

Russkoye Moloko, a 6,000-employee, Moscow-based dairy conglomerate issued a statement to the press announcing it would no longer buy British goods for its factories and dairies and would refuse to use British Airways or any other British airline “in connection with the persecution of Christians in Great Britain,” reports Tom Parfitt in the Daily Telegraph newspaper.

The announcement came after the British government said it would fight a case at the European Court of Human Rights brought by two British women seeking to establish the right to wear a cross openly at work.

Government officials defended the action, saying the wearing of a cross or crucifix is not a “requirement” of the Christian faith – and so, companies have the right to ask employees to conceal it.

“I know and respect Britain and I like its products,” said Russkoye Moloko’s CEO, Vasily Boyko-Veliky, “but in a country where the English monarch, the Queen, has a crown set with a cross, it looks like savagery to prevent the people wearing one. We are against the persecutors of faith. Our boycott is in support of those who are against this. We hope they will demand a law from parliament and the government to allow a cross to be openly worn.”

Russkoye Moloko employees are being urged to shun all British-produced food, furniture, electrical goods and clothes until the Government changes its position. A Bentley showroom which rents land from the company has been warned it will be evicted in July if there is no reversal.

Meanwhile in another challenge to tradition and personal choice, officials have confirmed that British teachers are now banning schoolkids from having best pals. Educational psychologist Gaynor Sbuttoni said the policy is being enforced at schools in the British cities of Kingston, South West London and Surrey.

Instead, reports journalist Harry Hawkins in The Sun newspaper,  “primary pupils are being encouraged to play in large groups.”

“Teachers tell children they shouldn’t have a best friend and that everyone should play together,” Sbottoni explained.  “They are doing it because they want to save the child the pain of splitting up from their best friend.”

“I don’t think it is widespread,” confirmed Russell Hobby, of the National Association of Head Teachers, “but it is clearly happening. It seems bizarre. I don’t see how you can stop people from forming close friendships. We make and lose friends throughout our lives.”

The Campaign for Real Education, which wants more parental choice in state education, said the “ridiculous” policy was robbing children of their childhood.

“Children take things very seriously and if you tell them they can’t have a best friend,” said spokesman Chris McGovern, “it can be seriously damaging to them. They need to learn about relationships.”

“This policy doesn’t just fly in the face of common sense, it’s chilling,” noted Sun opinion columnist Deidre Sanders. “Our childhood friendships are how we begin to learn about love and commitment. Of course, they often break up, and that is how we learn resilience so we can cope with rejection later.

“I hope this silly policy is buried as of now.”

Meanwhile, the European Court of Human Rights issued a ruling that, should same-sex marriage be legalized in the UK, British churches will have to marry homosexual couples regardless of their convictions – and they will not be protected by proposed British laws guaranteeing protections in matters of faith and conscience.

The British government has announced it intends to legalize same-sex marriage by 2015, according to the advocacy group Christian Concern. Churches have been assured they will not be required to conduct such ceremonies. However, such promises are worthless, said the European Court when ruling in a French case. The court’s rulings supercede British law because the UK is part of the European Union.

The court ruled in the French case that same-sex marriage is not a human right, but depends on local law. The European Court rules on disputes arising from the European Convention on Human Rights which was incorporated into UK law in the Human Rights Act 1998.

The ruling came as a result of a case involving a French lesbian couple who complained that  France would not allow them to adopt a child. The court ruled that, because the couple were civil partners, they did not have the rights of married people, who in France have the sole right to adopt a child as a couple.

However, that could change, explained the court’s specialist in discrimination law, Neil Addison: “Once same-sex marriage has been legalized then the partners to such a marriage are entitled to exactly the same rights as partners in a heterosexual marriage. This means that if same-sex marriage is legalized in the UK it will be illegal for the government to prevent such marriages happening in religious premises.”

Human rights do not apply in that case, nor in the Facebook controversy where a British judge decided a Christian demoted at work for posting private comments on his Facebook page criticizing gay marriage on moral grounds cannot cite human rights as a defense.

Adrian Smith sued his employers saying that demoting him for his private comments on Facebook was an infringement of his rights to freedom of speech and belief. In Manchester County Court, District Judge Charles Khan ruled Smith could that defense does not apply and found the employer, the Trafford Housing Trust, blameless for its actions.

Smith had posted a comment on his Facebook page, outside of working hours, stating that it is wrong to force churches to conduct same-sex weddings. “If the state wants to offer civil marriages to the same sex then that is up to the state; but the state shouldn’t impose its rules on places of faith and conscience,” he wrote on his Facebook “status update” to friends.

A colleague complained to their employer. As a result, Smith was found guilty of gross misconduct, for which he faced a demotion and a pay cut from 35,000 British pounds annually to 21,396. He was also given a written warning which stated that any further offense would end in his firing and that he only kept his job because of his 18-years outstanding work record.

And amid the religious debate swirling in the UK, matters were further stirred when a former London mayor seeking to return to office, Ken Livingstone, vowed in a speech to make the British capital a “beacon of Islam,” according to the Daily Telegraph’s London Editor Andrew Gilligan.

Speaking at the North London Central Mosque, Livingstone proclaimed “I want to spend the next four years making sure that every non-Muslim in London knows and understands [Islam’s] words and message. That will help to cement our city as a beacon that demonstrates the meaning of the words of the Prophet.”

Amid all the controversy, a discussion group has popped up on the Internet exploring the topic: “England have you gone completely nuts??”

Indeed, have government officials in Great Britain decided they are the only ones to make personal choices of right and wrong — of faith and tradition?

The consensus seems to be that perhaps not all is well in the British Isles. 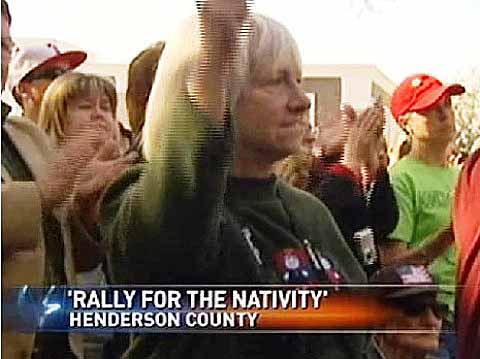 Texas town turns other cheek, helps atheist who threatened their nativity scene
archives most recent
More from Beliefnet and our partners
previous posts