A duck hunter in Utah reported to a hospital emergency room and told medical workers that his dog shot him.

In the derriere.  The glutteus maximus.

Emergency room workers say the hunter won’t be sitting comfortably for a few days, but is expected to recover fully.

“Dogs are man’s best friend,” reported Salt Lake City’s KSL. “Except, you know, when they’re shooting a gun at you.”

A Utah hunter was on the mend after surviving a gunshot wound from man’s best friend — yes, a dog.

While authorities don’t know all the particulars, this much is certain, hospital crews had to extract 27 pellets of birdshot from the man, according to news reports.

KSL reported that the Brigham City man in question — a 46-year-old hunting enthusiast whose name has not been released at his request — got a buttocks full of birdshot courtesy of his enthusiastic bird dog when the two were out duck hunting over the weekend.

Reportedly, they and another man were paddling a canoe through a shallow marsh when the dog’s owner stepped out of the boat to set up decoys. He had left his 12-gauge shotgun resting across the bow of the boat, according to Box Elder County Sheriff’s Deputy Kevin Potter.

That’s when the dog “did something to make the gun discharge,” Potter told KSL. “I don’t know if the safety device was on. It’s not impossible the dog could have taken it off safety.”

Apparently excited at the prospect of getting the hunting trip underway, the canine jumped up on the boat’s bow and stepped on the gun, firing a load of birdshot into the man, who was about 10 feet away.

The second hunter called 911 and transported his companion to the hospital, where he is recovering. Potter said he was wearing hip-length rubber waders — which kept him from suffering a more serious wound. 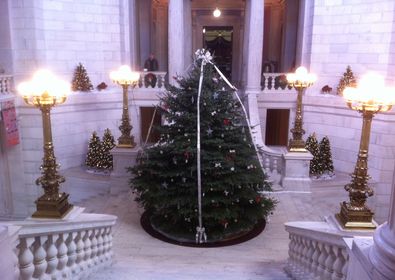