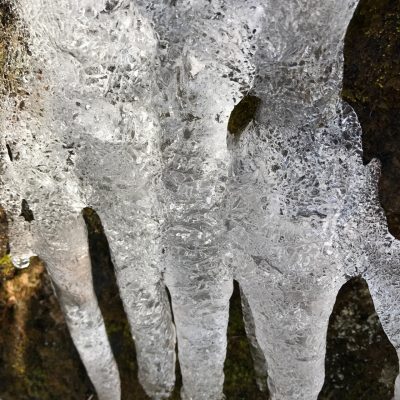 If there is ever any doubt about life’s impermanence, mud season starting in February erases it. Our dirt roads are rutted, the snows are melting, and flooding in some areas is an imminent threat. This isn’t supposed to happen until April.

Yesterday, I neglected to bring my phone with me on the walk. Thus, I couldn’t take pictures of some very interesting subject matter that were emerging from the thaw. I walked the same route to capture them today, and found that impermanence had done its work–they were all gone.

I had especially wished to capture the image of a large formation of icicles that were clinging to a boulder that, as they melted, had a waterfall running underneath them. That rock was clear today. The moment gone.

Of course, photography gives us a skewed view of impermanence–as if we could actually capture reality and pin it down for a time. I got the above photo instead, the last of the icicles returning to the earth. I’ve been taking a lot of photographs lately and posting to Instagram. Follow me on Instagram >>

I’ve been teaching a lot lately–four workshops in a stretch of just over a month–from California to Connecticut. I made the bold claim that Donald Trump is our dharma teacher. The Trump administration didn’t invent political impermanence with all its uncertainty, insecurity, and doubt but they certainly have made it more obvious.

Trump embodies what the Buddha taught we should not do if we want to be peaceful and sustainably happy. Greed. Check. Hatred. Check. Overblown belief in self. Check. DJT is an anti-role model. As a recent op-ed by Maureen Dowd in the New York Times has pointed out, he’s also made good on his promise to make America great again by mobilizing activism, increasing interest in the free press, and even boosting ratings on SNL.

The Dakini Speaks is a poem about impermanence and how we are not entitled to anything but that. The Dakini knows that “impermanence is life’s only promise and she keeps it with a ruthless impeccability.” You can link to this powerful poem on Jennifer Wellwood’s website.

The alternative to entitlement is gratitude. For each moment that something untoward does not happen, we can celebrate. Imagine if the news was un-news, reporting all the things that didn’t happen today. The natural disasters, murders, and mishaps.

Good news today: For the 22,778th day in a row since Nagasaki on 6 August 1945, a nuclear weapon was not exploded on a population.

Our negativity bias, tends to focus on what is wrong instead of what it not wrong. Gratitude helps us to reverse this trend and keep sight of the pernicious effects of entitlement. In any moment, some thing can happen to any one. There are no exceptions.

My poem Anicca is the Pali word for impermanence. I’ve been reciting this poem as well at my workshops:

It was there and then not there.
It came and went
It was never here in the way
that we hoped

It was a wave then a particle
Then a wave then gone or
Going at least.
Expanding until it vanishes
and the end is the beginning

Who am I in this cosmic expanse?
No one. No thing.
And everything.
My dust is the same dust form the beginning
That bowling ball that exploded into everything

When I forget that, I think I am important
That the universe needs me to persist.
I forgot, too, that I am expanding into nothingness.
My breathing shows me how this is so.
When I pay close enough attention
It is always different if
Decaying and renewing and
Moving along an invisible line toward the future.

I add all the moments for some calculus of worthiness,
It doesn’t register; doesn’t add up.
I have forgotten most of these moments
Although they live in the landscape of now,
Making up the soil and the water.
Most of the rest were only images,
conjured, glimpsed, and fleeting
They evaporate into time and become dreams
The remaining remembered and real
Have lost their footing and like Neruda’s time,
Walk barefoot through darkness and illumination – Arnie Kozak

Trump and the Truth: Feelings are not Facts
archives most recent
More from Beliefnet and our partners
previous posts