Echoes of Wisdom and the Divinity of Jesus (Part 2)

In my last post I began to examine echoes of Wisdom in the ministry of Jesus. By Wisdom, I mean not the human trait of wise judgment, but the divine characteristic pictured in the Old Testament and other Jewish sources as a female consort of the Lord. When Jesus intentionally speaks in the voice of divine Wisdom, and not merely as a human sage pointing people to Wisdom, the implications are striking. Jesus, one might conclude, by talking as if he himself were God’s Wisdom, is suggesting that he himself is in some sense divine.

The earliest Christians took this ball and ran with it. In several passages of the New Testament, the biblical writers portray Jesus as God’s Wisdom come to earth (see, for example, Colossians 1:15-20; Hebrews 1:1-4). Perhaps the most obvious and significant of these texts is John 1:1-18, the prologue of John’s gospel. This passage begins:

Now at first glance, this passage appears to associate Jesus with the Word of God, not the Wisdom of God. And it surely does make this association. In the Old Testament, God speaks creation into existence (Genesis 1). Thus one might say, as some who wrote the books of the Old Testament did, that the Word of God created the world. Take Psalm 33, for example:

Moreover, as the Old Testament records that “the word of the Lord” came to someone to reveal God’s truth, so John’s prologue recognizes Jesus the Word as the one through whom God’s ultimate revelation has come.

Without question, therefore, the Old Testament notion of the Word of God stands behind the opening verses of John’s gospel. But this isn’t the whole story, because the echoes of Wisdom in John 1:1-18 are so loud as not to be missed by anyone familiar with the Jewish Wisdom tradition. Consider Proverbs 3:19, for example: “The LORD by wisdom founded the earth; by understanding he established the heavens.” Sounds a lot like John 1:3, doesn’t it? But this is just the beginning. Consider the following parallels between the Word of God in John 1 and Wisdom in Jewish tradition:

What has come into being in him was life, and the life was the light of all people.

For whoever finds me finds life and obtains favor from the LORD.

He came to what was his own, and his own people did not accept him (v. 11)

. . . I have called and you refused, have stretched out my hand and no one heeded.

He was in the world, and the world came into being through him; yet the world did not know him. He came to what was his own, and his own people did not accept him. But to all who received him, who believed in his name, he gave power to become children of God.

Send her forth from the holy heavens, and from the throne of your glory send her, that she may labor at my side, and that I may learn what is pleasing to you. For she knows and understands all things, and she will guide me wisely in my actions and guard me with her glory.

And the Word became flesh and lived among us, and we have seen his glory, the glory as of a father’s only son, full of grace and truth.

For she is a breath of the power of God, and a pure emanation of the glory of the Almighty; therefore nothing defiled gains entrance into her. For she is a reflection of eternal light, a spotless mirror of the working of God, and an image of his goodness.

There are actually many more parallels between the Word in John’s prologue and Wisdom in Jewish tradition, a couple of which I’ll examine later. But the main point is clear, I believe. John’s picture of Jesus as the Word of God has been painted with Jewish Wisdom as a model.

John’s association of Word and Wisdom, as it turns out, was also something found in older Jewish sources. Consider the following passages:

For the LORD gives wisdom; from his mouth come knowledge and understanding (Prov 2:6).
It is he who made the earth by his power, who established the world by his wisdom, and by his understanding stretched out the heavens.  When he utters his voice, there is a tumult of waters in the heavens, and he makes the mist rise from the ends of the earth. (Jer 10:12-13)

“O God of my ancestors and Lord of mercy, who have made all things by your word,  and by your wisdom have formed humankind . . . .” (Wis 9:1-2)
For wisdom becomes known through speech, and education through the words of the tongue (Sir 4:24).

So, following in the footsteps of the Jewish sages, John painted a picture of God’s Word/Wisdom in the prologue of his Gospel. The most shocking element of this picture, of course, is the unprecedented identification of Word/Wisdom with a man, with Jesus of Nazareth. I’ll examine this in greater detail in my next post. 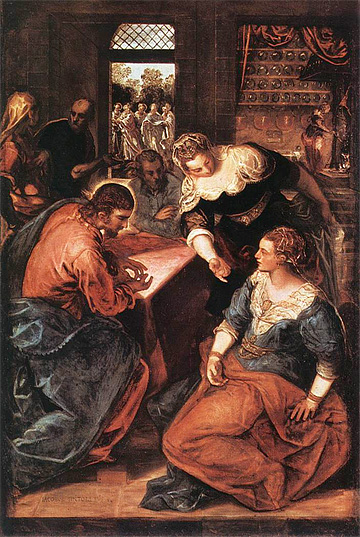 Echoes of Wisdom and the Divinity of Jesus: Part 1
archives most recent
More from Beliefnet and our partners
previous posts