What Language(s) Did Jesus Speak? The Circumstantial Evidence

If we take the Gospel record at face value, and I believe we have good reason to do so, then Jesus was born in Bethlehem of Judea and spent his earliest years in Egypt. Then his parents returned to their hometown of Nazareth, where Jesus grew up and lived until his began his itinerant ministry. This means he spent somewhere around 25 years in Nazareth. (Photo: A view of Nazareth. © holylandphotos.org. Used by permission.) 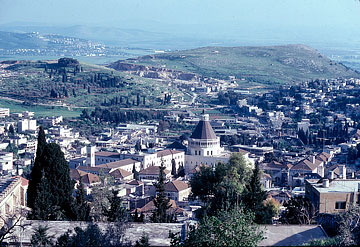 The question of Jesus’ primary language would be settled if we knew what people in Nazareth in the first decades of the first century A.D. were speaking. Unfortunately, this knowledge is more elusive than we might how. To my knowledge, there is no specific evidence about the language spoken in Nazareth during the life of Jesus. We don’t have inscriptions or ancient manuscripts that can be placed in Nazareth at this time.

There is evidence, however, that points to the use of Aramaic in Galilee, the region where Nazareth was located. Such evidence includes inscriptions, contracts, and other ancient writings. It makes sense that residents of Nazareth spoke Aramaic, given the fact that Aramaic became the official language of Galilee from the sixth-century B.C. onward. Thus, it seems likely that ordinary residents of Galilee, including Nazareth, spoke Aramaic as their first language. This was the language of common discourse among Jesus’ family and friends.

A few scholars believe that people in Nazareth spoke Hebrew as their primary language. This is possible, but unlikely. Hebrew may well have been used primarily among some people in Judea (south of Galilee), among Jewish separatists (those who wrote the Dead Sea Scrolls), and among Jewish theologians, but even among these people Aramaic is prevalent. As far as I know, we have no strong evidence for the common use of Hebrew in Nazareth and the surrounding region of Galilee. However, Hebrew was the language of theological inquiry and debate among Jews, in addition to the language of their Scriptures. Scholars from the Jerusalem School of Synoptic Research acknowledge the multilingual environment of Jesus’ culture, but insist that Jewish teachers ordinarily taught in Hebrew. It’s certainly possible that Jesus himself taught in Hebrew at times (see below), but, given his widespread interaction with common people and not just scholars and the fact that his early teaching was in Galilee, it seems more reasonable to assume that Jesus spoke Aramaic and used this language for much of his teaching.

In recent years, more scholars are taking seriously the possibility that Jesus spoke Greek. I’ll examine relevant evidence from the Gospels later in this series. For now, it is worth nothing that Greek was commonly used in certain strata of Galilean society. This began when Alexander the Great conquered the region in 332 B.C. Under his rule, and under the rule of those who followed him (the Ptolemies and the Seleucids), Greek was the language of government and commerce. The Romans used Latin for official communication, but Greek was the common language of the Empire.

Would people in Nazareth have spoken Greek? Not as their first language. But many of them would have been familiar with Greek and used it in their businesses. In fact, Nazareth was a short walk from Sepphoris, one of the major cities of Galilee, where Greek would have been the everyday language of the marketplace. As a craftsman living near Sepphoris, Jesus might well have known enough Greek to do business with the people there.

So where does the circumstantial evidence for the language of Jesus leave us? It points to Aramaic as his first language. But the multi-lingual context of Galilee suggests that Jesus and his fellow residents of Nazareth might have spoken Hebrew and/or Greek as well. Thus, we would do well to heed the word of caution penned by Richard A. Horsley in his book, Galilee: History, Politics, People: “It is difficult in the extreme to interpret the fragmentary evidence available and draw conclusions for the use of languages in late second-temple Galilee” (p. 247). Horsley’s discussion of this issue, which is the best of which I am aware, supports the common use of Aramaic in Galilee, but documents the use of Hebrew and Greek as well (pp. 247-250).

So, the circumstantial evidence for Jesus’ use of Aramaic is strong. Yet nothing in this evidence demands that Jesus could not have known and used either Hebrew or Greek or both in his teaching.