Jesus and Aramaic in the Gospels

The earliest manuscripts of the New Testament Gospels – Matthew, Mark, Luke, and John – are written in Greek. Though a few scholars argue that Matthew first appeared in Hebrew or Aramaic, most believe that the four biblical Gospels were composed in Greek. Their writers might well have known Aramaic and/or Hebrew, and they may well have drawn upon oral and written sources in these Semitic languages, but when they put stylus to papyrus, then wrote in common Greek.

Yet the New Testament Gospels do include non-Greek words in the text (spelled with Greek letters). And some of these words are Aramaic. Others are probably Aramaic, though they might be a variety of Hebrew. The word Abba, for example, which means “father” or “papa” in Aramaic, can also be found in certain later Hebrew dialects. So, while Jesus’ use of Abba probably reflects his Aramaic speech, we can’t be 100% sure of this.

In Mark 3, we find the story of Jesus’ calling of the twelve disciples. In the list of those whom he called, we find these names: “James son of Zebedee and John the brother of James (to whom he gave the name Boanerges, that is, Sons of Thunder)” (Mark 3:17). The word boanerges is a Greek transliteration of an Aramaic phrase, though the precise phrase is not altogether clear. Several Aramaic options are possible. (Photo: A painting of the Crucifixion of Jesus, from a church in Taormina, on the island of Sicily). 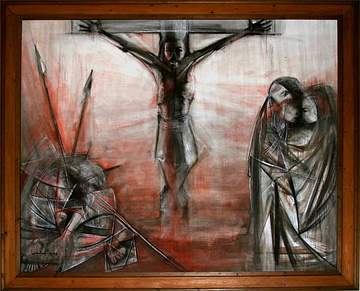 One of the most striking Aramaic sentences found on the lips of Jesus in the Gospels is: eli eli lema sabachthani (Matthew 27:46; Mark 15:34 uses eloi instead of eli). The sentence is then translated into Greek by Matthew and Mark, with the English meaning: “My God, my God, why have you forsaken me?” This, as it turns out, is a quotation from Psalm 22:1, which reads in Hebrew: ‘eli ‘eli lama ‘azavtani. (Here you can see, by the way, an example of the similarity between Aramaic and Hebrew.) The fact that Matthew and Mark have Jesus speaking in Aramaic does suggest that this line was remembered by the early Christian community in its original language, namely, Aramaic. But the ancient manuscripts of the Gospels include a variety of options, so we can’t be completely positive of what Matthew and Mark wrote, or which language Jesus spoke. He could have used Hebrew, which was translated and passed down in Aramaic by the early church.

The clearest example of Aramaic on the lips of Jesus in the Gospels occurs in Mark 5:41. Jesus entered the home of a synagogue leader whose daughter had died. “Holding her hand, he said to her, ‘Talitha koum,” which means “Little girl, get up!” Both Matthew and Luke tell this same story, but without the Aramaic sentence (Matt 9:24; Luke 8:54). Matthew simply describes the healing while Luke includes only the Greek translation. Mark, however, passes on what appears to be the actual words of Jesus, word in Aramaic.

Mark 5:41 provides persuasive evidence for Jesus’ use of Aramaic in this particular instance. But the text does not tell us exactly what to make of this usage. One could argue that Mark’s account of the raising of the girl shows that Jesus’ use of Aramaic was unusual, and that’s why it was remembered. Or one could conclude that Jesus used Aramaic in this situation, which was not, at any rate, a teaching time.

The existence of Aramaic words and phrases on the lips of Jesus, combined with what we know about the probably use of Aramaic in Jesus’ homeland,  convinces me beyond any doubt that Jesus spoke Aramaic and used it in his ministry. I think it would be very difficult to argue otherwise. However, the fact that Jesus used Aramaic at times does not prove that he used only Aramaic. Living and ministering in a multi-lingual environment, Jesus might have used other languages as well, namely Hebrew and/or Greek. I’ll consider these possibilities in more depth below.

What Language(s) Did Jesus Speak? The Circumstantial Evidence
archives most recent
More from Beliefnet and our partners
previous posts