How to Be a Sore Loser

I have been watching the LeBron James saga with some interest. You learn a lot about human nature from the people who live publicly.

So LeBron chose to leave the Cleveland Cavaliers and join the Miami Heat. He did this, I expect, not only because he’ll be getting gobs of money, but mostly because he figures that he has the best chance of a national championship this way. I don’t blame him for making this decision, even though I had hoped he’d stay with the Cavs. After all, LeBron grew up in Ohio. And, even though he has not been able to win a national championship in Cleveland, there is still plenty of time. He is, after all, only 25! It would have been a Cinderalla story if LeBron had been able to lead the Cavs to the title, and, goodness knows, Cleveland deserves such a prize. They haven’t had a major sports championship in almost 50 years.

I can understand that sports fans in Cleveland are devastated. I can even understand that they feel betrayed, though I think these feelings ignore the realities of pro sports. Let’s face it, the NBA is a game and a business, not a family.

I can also understand that the owner of the Cavaliers was angry. Anger usually covers sadness and fear, both of which will no doubt fill the heart of majority owner Dan Gilbert. He’ll be sad that his effort to bring a championship to Cleveland as suffered such a blow. And he’ll be afraid that his ticket sales will plummet, making the chances of a future championship even more slim. 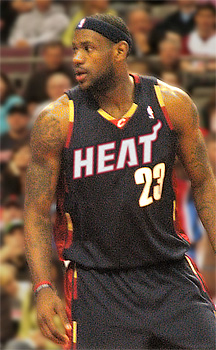 But I cannot understand why Mr. Gilbert decided to publish such an extraordinarily bitter and unprofessional letter. He put in writing – and on the Internet – feelings and thoughts that were better kept in private. Does this man have no shame? Does he have no wisdom? Does he have no PR advisors? Has he ever heard of the high road? Does he want to turn off basketball stars who might consider playing for the Cavaliers in the future?

Here’s the text of Mr. Gilbert’s letter (with bold-face added by me):

Dear Cleveland, All Of Northeast Ohio and Cleveland Cavaliers Supporters Wherever You May Be Tonight;

As you now know, our former hero, who grew up in the very region that he deserted this evening, is no longer a Cleveland Cavalier.

This was announced with a several day, narcissistic, self-promotional build-up culminating with a national TV special of his “decision” unlike anything ever “witnessed” in the history of sports and probably the history of entertainment.

Clearly, this is bitterly disappointing to all of us.

The good news is that the ownership team and the rest of the hard-working, loyal, and driven staff over here at your hometown Cavaliers have not betrayed you nor NEVER will betray you.

There is so much more to tell you about the events of the recent past and our more than exciting future. Over the next several days and weeks, we will be communicating much of that to you.

You simply don’t deserve this kind of cowardly betrayal.

You have given so much and deserve so much more.

In the meantime, I want to make one statement to you tonight:

You can take it to the bank.

If you thought we were motivated before tonight to bring the hardware to Cleveland, I can tell you that this shameful display of selfishness and betrayal by one of our very own has shifted our “motivation” to previously unknown and previously never experienced levels.

Some people think they should go to heaven but NOT have to die to get there.

Sorry, but that’s simply not how it works.

This shocking act of disloyalty from our home grown “chosen one” sends the exact opposite lesson of what we would want our children to learn. And “who” we would want them to grow-up to become.

But the good news is that this heartless and callous action can only serve as the antidote to the so-called “curse” on Cleveland, Ohio.

The self-declared former “King” will be taking the “curse” with him down south. And until he does “right” by Cleveland and Ohio, James (and the town where he plays) will unfortunately own this dreaded spell and bad karma.

Tomorrow is a new and much brighter day….

I PROMISE you that our energy, focus, capital, knowledge and experience will be directed at one thing and one thing only:

DELIVERING YOU the championship you have long deserved and is long overdue….

Whew! I hope Mr. Gilbert feels better, having gotten that off his chest.

There is so much that’s wrong with this letter I don’t know where to start. So I’ll simply focus on one point and leave it there. No matter what one thinks of LeBron’s behavior, I know for sure that I do not want my children to learn how to behave from Dan Gilbert. His “heartless and callous” lack of grace reveals him to be the opposite of what I want my children to become.

It used to be the sports taught one how to be a gracious loser. Not anymore, I guess. Mr. Gilbert is one of those who has turned a character-developing game into a cutthroat, self-interested, narcissistic business. The sad irony is that Mr. Gilbert doesn’t realize that his way of communicating and what it represents is the sort of thing that produces a LeBron James. And if I were LeBron, I certainly wouldn’t want to work for someone like Dan Gilbert.

Just in case Mr. Gilbert reads my blog (yeah, like that’s every going to happen), I thought I’d edit his letter. Here’s what he should have said:

Dear Cleveland, All Of Northeast Ohio and Cleveland Cavaliers Supporters Wherever You May Be Tonight;

As you now know, LeBron James is no longer a Cleveland Cavalier.

Clearly, this is bitterly disappointing to all of us.

Nevertheless, I want to thank LeBron, on behalf of the Cavaliers organization and all of our fans, for many years of fantastic basketball. LeBron has given us much, and we have been glad to give much back to him. We will miss him personally and as an amazing athlete. We wish him well in his future, though we will, of course, do everything to make sure that the Cavaliers, and not his new team, are the next champions of the NBA.

There is so much more to tell you about the events of the recent past
and our more than exciting future. Over the next several days and
weeks, we will be communicating much of that to you.

In the meantime, I want to make one statement to you tonight:

I PROMISE you that our energy, focus, capital, knowledge and experience will be directed at one thing and one thing only: DELIVERING YOU the championship you have long deserved and is long overdue….

Tomorrow is a new and much brighter day….

Did Jesus Speak Hebrew?
archives most recent
More from Beliefnet and our partners
previous posts