In yesterday’s post, I began looking at a particular kind of argument for the position that Jesus spoke Hebrew. This argument is based on “biblical truth,” because it points to Acts 26:14, a text that reads in the ESV, “And when we had all fallen to the ground, I heard a voice saying to me in the Hebrew language,* ‘Saul, Saul, why are you persecuting me? It is hard for you to kick against the goads.'” (Acts 26:14, “*Or the Hebrew dialect [that is, Aramaic]”).

Many modern English translations actually prefer the rendering found in the ESV footnote, going with something like “in Aramaic” (NIV). But some, such as Douglas Hamp, author of Discovering the Language of Jesus: Hebrew or Aramaic? disputes this translation:

This belief [that Aramaic was used by Jews in the time of Jesus] became so commonplace that the New International Version (NIV) translation of the Bible followed suit with the assumption by systematically translating the words Hebraidi and Hebraisti (both mean Hebrew) as Aramaic. . . . For example, in John 5:2 the NIV translates “. . . near the Sheep Gate a pool, which in Aramaic is called Bethesda . . .” instead of the literal translation Hebrew (though “or Hebrew” is in the footnotes). Obviously, the rationale for doing so stems from the belief that Aramaic had replaced Hebrew. Is this justifiable when the word is clearly Hebrew? (Hamp, p. 4)

According to the Calvary Chapel Costa Mesa website, where Douglas Hamp is employed in their School of Ministry, he has an MA in the Hebrew bible from the Hebrew University of Jerusalem. So he clearly has some background in Hebrew, and presumable Aramaic. Thus it is surprising that he should make such an obvious mistake in his writing. He asks, “Is this [translating Hebraisti as Aramaic] justifiable when the word is clearly Hebrew?” But it is not clearly Hebrew. You cannot find the letters “H-e-b-r-e-w” in the text, even in Greek letters. Truly, Hebraisti looks quite a bit like Hebrew, to be sure. But it is not the English word Hebrew. And one cannot argue that just because an old Greek work looks and sounds like a modern English word therefore that Greek word means what the English word means.

Take, for example, the Greek word gar. It looks and sounds exactly like the English word gar. But gar in Greek does not mean “a freshwater fish of North America.” In fact, gar in Greek meant “for” or “because.” Similarly, the words Hebraisti and Hebraidi, which look and sound like Hebrew, may or may not mean Hebrew. The question is not similarity of form or sound. Rather, it’s a question of how these words were used in the first century. When Paul said that Jesus spoke to him te Hebraidi dialekto, did he mean “in Hebrew” or “in Aramaic” or even “in a Hebrew dialect that could be either Hebrew or Aramaic.” We cannot answer this question by the way the words look and sound, but only by how they were used at the time.

Consider another example. When one learns to speak Spanish, one discovers that there are many, many words in Spanish that look like words in English. This makes understanding and translation much easier. So, suppose you meet a young woman who speaks Spanish. You’re not very good at Spanish, but you want to ask her if she’s intelligent. So you take a stab at it and say, “¿Eres intelligente?” She smiles and says “Sí.” Job well done. But suppose you want to ask her if she’s embarrassed. So you make another educated guess and ask, “¿Eres embarazada?” Sounds good, right? But the young woman slaps you in the face and stomps off. What went wrong? Well, embarazada looks and sounds a lot like embarrassed, but it doesn’t mean that. It means pregnant. Oops. Linguistic error. Not prudent to ask a young woman if she’s pregnant. ¡Que vergüenza! (How embarrassing!)

John 19:13 reads: “When Pilate heard these words, he brought Jesus outside and sat on the judge’s bench at a place called The Stone Pavement, or in Hebrew Gabbatha [Hebraisti de Gabbatha].” Gabbatha is an Aramaic word that means “height” or “eminence.” Thus, in this case, Hebraisti means “in Aramaic,” not “in Hebrew.” 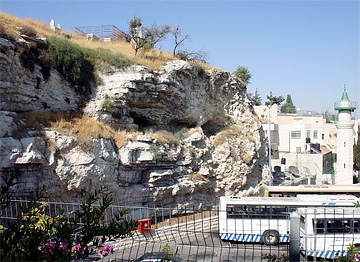 John 19:17 says: “[A]nd carrying the cross by himself, [Jesus] went out to what is called The Place of the Skull, which in Hebrew is called Golgotha [ho legetai Hebraisti Golgotha].” Once again, the word Golgotha is in Aramaic. (Photo: One of the possible locations for Golgotha, chosen because it looks rather like a skull. Golgotha represents an Aramaic expression that means “place of the skull.” Photo used by permission of www.holylandphotos.org.)

The fact that place names in Jerusalem were in Aramaic surely supports the common use of Aramaic among Jewish people in that city and surrounding area. Indirectly, it supports the use of Aramaic by Jesus. This is verified by other evidence from the New Testament. In Acts 1:19, for example, we find this description of the field in which Judas killed himself: “This became known to all the residents of Jerusalem, so that the field was called in their language Hakeldama, that is, Field of Blood.” Hakeldama is an Aramaic expression. Notice that Acts refers to the fact that this Aramaic name was “in their language,” that is, in the language of the residents of Jerusalem. So, we should not be surprised that Gabbatha and Golgotha are also Aramaic words, words that are described in John as Hebraisti. Even though this word looks like “in Hebrew,” it actually means, or at least can mean, “in Aramaic.”

In sum, the argument that Jesus must have spoke Hebrew because of Acts 26:14 fails on several counts. Not only does this verse not tell us what language Jesus spoke in other contexts, but also the phrase te Hebraidi dialekto, which looks to us like “in the Hebrew dialectic” turns out to mean, in all likelihood, in the Aramaic dialect.

This should give reassurance to Christians who fear that the argument that Jesus spoke Aramaic somehow undermines the authority of Scripture. In fact, it does nothing of the kind. Whether Jesus spoke Aramaic or Hebrew, or, as I believe, a combination of the two depending on his context, either option concords with a fully authoritative Bible.

The same is true, by the way, if Jesus spoke Greek. In my next post in this series I examine this possibility.