Why Don’t We Pray for Business? Part 3

In the last two days I have begun to consider why it is that Christians do not pray for business, at least not very often in the context of corporate worship. So far I have suggested two reasons:

Reason #2: We don’t pray for business because those who lead us in prayer have not been trained to do so.

Today I offer a third reason, one that helps to explain Reason #2:

Reason #3: We don’t pray for business because our worship leaders have been trained in settings that are indifferent or negative to business.

For the most part, seminaries, divinity schools, and pastor-training churches do not teach students to pray for the marketplace and its people. This seems odd for many reasons, including one of the most obvious: Churches are filled with people who invest a major proportion of their lives in business. Sure, our sanctuaries include plenty of people who work in the public or non-profit sectors of the economy. But a high percentage of church members work in business. If churches are seeking to help people be disciples of Jesus in their daily lives, and most churches would say this is central to their mission, then it seems only natural for churches to address marketplace concerns, in teaching, preaching, and prayer.

Yet this is not happening on a regular basis in most churches. David Miller, in his book God at Work, summarizes research that shows, for example, that “one can sit through a year’s worth of worship services and seldom hear a connection (let alone a constructive connection) between one’s faith claims and one’s workplace reality” (Kindle Location 1263-66). This lack of connection impacts worship in addition to preaching, according to Miller: “While sermons are often the most visible form of liturgical indifference to the workplace, other aspects of worship (including prayer, confession, pardon, music, commissioning, and benediction) contribute as well” (KL 1269-1270).

While clergy may retain strong personal relationships with businesspeople at a personal level, socializing and indeed, courting their financial pledges to the church, many unwittingly perhaps continue to transmit anticapitalist messages to their congregation. The perception being sent from the pulpit is that businesspeople are greedy, captive to the values of an oppressive system, and insensitive to the plight of the poor. (KL 1258-60)

Evangelical and Pentecostal churches sometimes exhibit a friendlier attitude toward the marketplace, and some even try to help members live out their faith at work. But this is not the norm, as Miller’s research demonstrates.

Why do so many pastors regard business with indifference, if not outright negativity? David Miller lays the blame on the shoulders of the seminaries and divinity schools. I should mention, by the way, that Miller is himself a graduate of Princeton Theological Seminary, an ordained minister in the PCUSA, and a former seminary teacher in addition to an international banker. Moreover, his book, God at Work, is based on extensive empirical research. Here is some of what Miller observes about seminary education and business:

[Most] seminaries do not equip pastors in the local church to reform their marketplace perceptions or shape their liturgy, vocabulary, and other theological presuppositions with a view toward intentionally ministering to the needs of the business community. (KL 1344-45)

There are several likely reasons that the academy has exhibited an indifferent to pejorative stance toward the workplace and those in the corporate world, including a lack of business expertise among theologians; doctrinal and ideological differences; the residual effects of Christian socialism and liberation theology; . . . a reluctance of faculty and administrators to embrace interdisciplinary topics . . . . (KL 1314-17)

Closely related to the absence of seminary teaching on [Faith at Work] issues, the evidence suggests that the overarching presuppositions among theological faculty about capitalism, business, and marketplace issues range from indifferent to negative. The evidence suggests that seminary faculty tend to portray the business community and its underlying dynamics as simplistic (ignoring the moral and ethical complexities); sinful (as if capitalism and its participants were prima facie theologically incorrect); unsympathetic to social justice concerns (wanting merely to maximize profits with no sense of social responsibility); harmful to and exploitative of people (where people become disposable assets); interested exclusively in profits (and not how the profits are earned); and disinterested in the common good of society (leaving that to government and others to address). (KL 1347-1351)

Thus influenced by their faculty, the result is that seminary students’ attitudes toward business and religion, as well as to FAW [Faith at Work], are “overwhelmingly negative.” Students are often left with a one-note song, “lecturing, not listening,” concluding that the best way to address business and FAW issues is by proclaiming a prophetic voice. . . . The danger, in the end, is that seminary education biases future pastors against the structural and contextual world of business, without any appreciation of its constructive and co-creative possibilities to help society and promote the common good. (KL 1352-1356)

Miller does see glimmers of hope, however. He documents several initiatives in seminaries that seek to prepare students for pastoral ministry to the marketplace and its people. He notes a number of leading theologians in seminaries and divinity schools who are addressing the relationship between faith and work in a positive way. And he observes that theologically conservative seminaries tend to be more helpful in this area:

Theological schools that are generally considered to be evangelical or conservative are increasingly more inclined to see the relevance of theology to the workplace and, in various ways, are trying to teach and think theologically about the issues surrounding the Faith at Work movement. In contrast, institutions typically considered to be mainstream or liberal range from being silent to being negative about FAW issues. (KL 1320-1322) 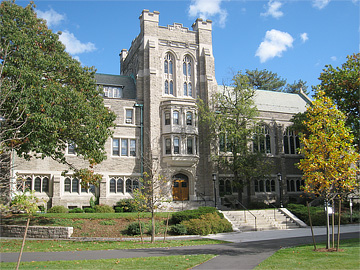 What David Miller documents with scholarly precision fits with my own experience. I attended Harvard Divinity School. I have taught at San Francisco Theological Seminary and Fuller Theological Seminary. I have an above-average awareness of what is going on in many seminary settings. For the most part, seminaries and divinity schools do regard business with indifference, and often with disdain. This seems ironic, given the extent to which these institutions depend on the generosity of people who have made their fortunes in business. But the anti-business voices are usually those of the faculty, not the administrators or development officers who have to raise faculty salaries. Consistent with Miller’s observation, I have found more openness to a positive approach to business at Fuller Seminary, which is theologically evangelical. (Photo: Andover Hall of Harvard Divinity School)

If it is true that seminaries are not training pastors to minister to the marketplace and its workers, and if such ministry is valid (which I am assuming, at the moment), then the way forward is obvious: Seminaries and divinity schools should make an effort to prepare pastors for ministry to the marketplace. The obstacles to this approach are many, however. If thos
e who are teaching in seminaries truly believe that business is mostly bad, then they will be unable to train students for anything other than a negative-prophetic stance with regard to business. So, it seems that what is needed is not just a refocusing of curriculum, but rather a recasting of a theology of work and business. I’ll have more to say about this later. 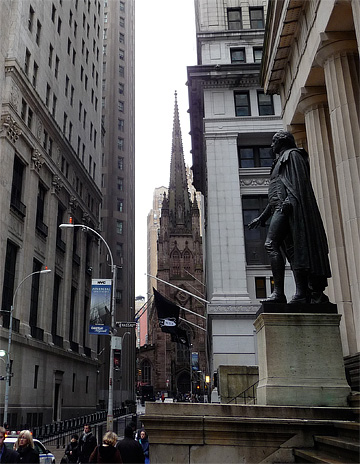 Why Don't We Pray for Business? Part 2
archives most recent
More from Beliefnet and our partners
previous posts