Harvard Ironies: The Statue of the Three Lies

If you were to visit my alma mater, Harvard University, no doubt you’d wander about in Harvard Yard. And, if you were like thousands of other visitors to “The Yard,” you’d end up getting your picture taken in front of the statue of John Harvard. 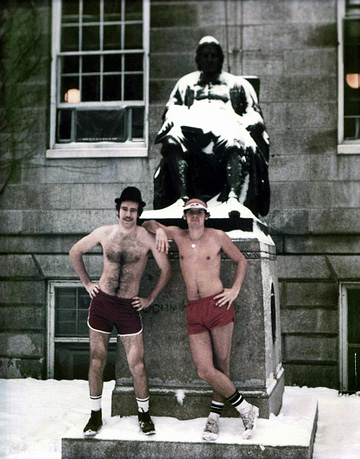 Or at least you’d think you had your picture taken in front of a statue of John Harvard. After all, the statue has the name “John Harvard” engraved upon it, along with the information that he founded Harvard College in 1638. But, as it turns out, none of these “facts” is true. That’s why students in the know refer to this monument to Mr. Harvard as “The Statue of the Three Lies.” (Photo: The statue of John Harvard in the winter, with a couple of crazy freshman standing in front of it. Yes, I am one of those who thought it would be fun to brave 28 degree temperatures to take a photo in front of the statue. My roommate Henry is on the right.)

What are the lies?

1. The bronze man is not John Harvard, who left no visual representations of himself, but rather an unnamed student who sat for a sculptor in the 1800’s, two centuries after Mr. Harvard died.

2. John Harvard did not found a college at all. Rather, when he died in 1638, he left a small amount of money and his library of 320 books in his will to be used for the training of young men for Christian ministry.

3. The college (not called Harvard at this time, of course), was founded by the General Court of Massachusetts in 1636. It was named “Harvard College” in 1638 (or 1639) in honor of John Harvard’s benefaction.

So, the statue supposedly of John Harvard who founded Harvard College in 1638 is actually a statue of an unknown Harvard student who represents the real John Harvard, who did not actually found a college in 1638, but who died in 1638, leaving money for a school that had been founded two years earlier. Rev. Harvard, who was known to be a passionate preacher, intended his gift to support the training of Christian ministers. (For more info on John Harvard, see this article.)

Given the current religious state of Harvard University – not exactly a paragon of Christian faith – there’s much irony here. But I want to focus for a moment on the deceptions of this statue. Surely they aren’t the sorts of lies that ruin lives or nations. Yet I find this statue to be a symbol for the reality of our culture. Whether we recognize it or not, we’re swimming in a sea of deceptions. Even the most prominent image of the university committed to Veritas (truth) is touched by duplicity.

I don’t want simply to complain about the deceitfulness of our world today. This gets tiresome. I do want to suggest to things that you and I can do to make a difference, albeit a small one. First, we can be steadfast in seeking the truth. Whether that truth is political, religious, historical, relational, or whatever, we need to invest our efforts to go beneath the façade and spin in order to find the truthful bedrock. Second, we can strive in our own lives to be people who speak and live the truth. I have felt to strongly about the need for us to be people of truth, in word and in deed, that I wrote a whole book about this, Dare to Be True. I’m convinced that, with God’s help, we can live truth-full lives. . . not perfectly, but with consistency, by God’s grace. Our being people of truth will make a huge difference in our daily lives and closest relationships. And it will make a small dent in the larger world in which we live.

How is Your World Geography?
archives most recent
More from Beliefnet and our partners
previous posts