From the Boerne Star:
Aug 23
1000 block of Adler Road, 4:37 p.m., A man reported that someone in the area fired a rifle in the air and the bullet came down through the caller’s roof. No injuries were reported. [MDR – Yikes! I always wondered if something like this ever happened.]
Aug. 24
29000 block of High Eschelon, 8:37 a.m., A caller complained about a truck that had been driving slowly in the area and that the driver had “shot the finger” at her. [MDR – Never heard that expression before, though I’ve received it every now and then while driving.] 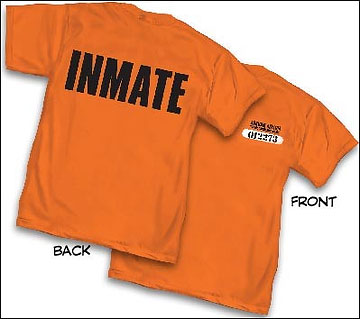 Aug 29
533-mile marker Interstate 10, 7:15 p.m., A caller reported a motorcycle rider wearing an orange shirt with the word “inmate” on the back. Police stopped the motorcycle rider who was wearing a Batman shirt. [MDR – Photo of the Batman Arkham Asylum Inmate Shirt.]
Sept 1
600 block of Oak Park, 2:28 p.m., A woman called police because her son was upset that his wife was talking to another man online. [MDR – Think about it. If a mother calls the police because the wife of her married son was talking to another man online, what does that tell you about the son and his mother? Yikes! You may begin to understand why the wife would be tempted to chat online with other men.]
From the Hill Country Weekly:
Aug 21
1:38: a.m. 29700 High Eschelon – A man in the back seat with six cell phones connected to three laptops undoubtedly wasn’t what the officer expected when he stopped the car with Louisiana plates for running through a stop sign. The driver said they worked for a subcontractor of AT&T and were checking 3G-network reception in the area. Come to find out, that’s exactly what they were doing. The officer, who gave the driver a warning on the stop sign violation, asked them to let the local law know the next time they might be in the area. [MDR – You get a little more editorializing from the Hill Country Weekly]
Aug 22
7:30 p.m. 8400 Rolling Acres Trail – A couple of officers tried to help a resident get a raccoon out from under the hood of his car, but nothing they tried worked and the resilient raccoon was left to come out on its own. [MDR – I hate it when that happens!]
Aug 26
1:17 p.m., N. School Street – Caller has a man who is asking about a million dollar home he will be buying for the pope and has been in the office several times. Officer advised guy to leave till he’s ready to purchase. [MDR – Everybody is moving to Boerne, even the Pope!]
read next post 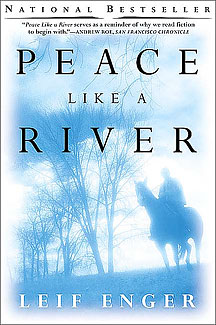 Recommendation: Peace Like a River by Leif Enger
archives most recent
More from Beliefnet and our partners
previous posts