The Pride of the Pulpit

In my first post in this series, I talked about the power of the pulpit. The preacher who stands in the pulpit (or, as is increasingly common today, on the stage) has been given an extraordinary amount of power. There are few other places in contemporary where people will sit attentively and listen to someone speak without expecting to ask questions or raise objections. (Perhaps some classrooms and lecture halls have a similar dynamic. So do courtrooms.)

Since I am an occasional preacher, you may find it odd for me to talk about the power of the pulpit. Am I boasting? Am I puffed up with my own authority? I hope not. I’m talking this way not because I’m too big for my pastoral britches, but because I think both preachers and congregations would be better off by acknowledging the power of the pulpit. Only then will we be able to evaluate truly whether this power is being well-used or not. 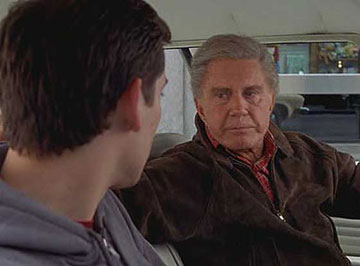 Preachers, it seems to me, would do well to heed the advice that Uncle Ben gave to Peter Parker in the first Spider-Man film. Without realizing the full implications of what he was saying, since he didn’t know that his nephew had super powers, Uncle Ben said to Peter, “With great power comes great responsibility.” Here’s a line worth remembering for every preacher: “With great power comes great responsibility.” (Ironically, only thirteen seconds later, Uncle Ben added, “I don’t mean to lecture and I don’t mean to preach.”) (Photo: Cliff Robertson as Uncle Ben and Tobey Maguire as Peter Park in Spider-Man [2002])
But there are also risks in having power, and for preachers, one of these is pride. Getting up into a pulpit, looking down on a congregation, having people listen attentively without interrupting or questioning, being told “Nice sermon” again and again . . . all of this can go to the head of the preacher, greatly enlarging it. One can begin to think: Wow! I guess I really am something special. My ideas are pretty darn good. I’m pretty hot. Of course most preachers wouldn’t actually articulate such things since they are telltale signs of sinful pride. But thoughts like these can haunt a preacher’s consciousness, and they can lead to irresponsible preaching.
What do I mean by irresponsible? Several things, actually. A preacher is, first and foremost, responsible to pass on the truth of God faithfully and accurately. This requires lots of careful study of Scripture. But preachers who are overly impressed with themselves will tend to cut corners in their preparation.
Preachers are also responsible to speak authoritatively about that which is revealed in Scripture, but more hesitantly about applications and implications that are not clearly implied in Scripture. For example, as a preacher I could speak strongly in calling my congregation to love their neighbor, since this command is repeated several times throughout the Bible. Yet if I were to apply this command to a specific situation, say, loving the neighbor who abuses alcohol, I would need to be more tentative in my instructions. Sometimes love means confronting someone directly. Sometimes love requires patience in waiting for an opportune moment. Etc. etc. If I were applying the biblical call to love to the political arena, I would need to be similarly circumspect. Does love demand a tax-driven, government-run welfare state to care for the poor? Perhaps. Or does love point in the direction of economic development in a free enterprise model? Perhaps.
It’s at this point that preachers often let their pride overcome their good judgment. They get so caught up in the power they have as preachers that they overstep the rightful bounds of their authority. In my opinion, this is surely true of Rev. Jeremiah Wright, who, as a preacher, should not have been preaching that the U.S. Government invented HIV “as a means of genocide against people of color.” Even if he actually believes this theory, he should not have preached it as gospel truth.
But it’s not just Rev. Wright who let his pride run away with him. I’ve heard conservative Christian preachers on television speak with extraordinary boldness and certainty about how the United States should relate to the nation of Israel. I understand that they think they can derive this from Scripture, but they should at least realize they are drawing distant implications from the biblical text.
Pride can lead preachers to speak far beyond, not only biblical teaching, but also their own expertise. I’ve heard preachers, for example, bash psychology as unchristian. What they have said about psychology, however, reveals a very scanty and superficial understanding of the subject. Their concerns about certain kinds or practices of psychology may be on target. But their generalizations and blanket condemnations are, in my view, irresponsible. They really don’t know what they’re talking about, but they’re too puffed up to realize it.
The pride of the pulpit relates, I think, to the lack of accountability for preachers. For the most part, preachers can get away with saying almost anything in their churches. This, I think is a problem. I’ll have more to say about it in my next post in this series.