Ivy League Congress on Faith and Action: My Presentation 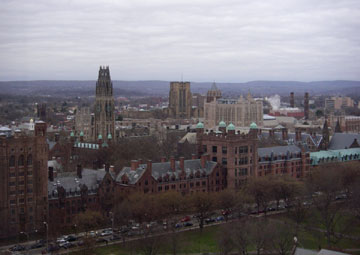 As I mentioned yesterday, this past weekend I participated in the Ivy League Congress on Faith and Action in New Haven, Connecticut – a short walk from Yale University. (Photo: Yale University from my hotel. In the immediate foreground is the New Haven Green, then the Old Campus. The prominent tower is Harkness Tower. As a Harvardarian, I hate to admit that I find the Yale campus quite attractive, reminiscent of Oxford University.)

The Ivy League Congress included many “Vocational Panels” in a variety of fields: Medicine, Law, Academy, Arts, Government, Business, Ministry, and Media. Speakers made it clear that God’s call extends to any of these fields (and others). One can serve God as a “full-time minister” as a doctor, lawyer, banker, pastor, and so forth. This theology of ministry and discipleship is right on from a biblical point of view, and consistent with the vision of the ministry where I now serve. (See, for example, The High Calling of Our Daily Work website, sponsored by the Foundation that also supports Laity Lodge.)
I was teamed up on the “Ministry” panel with Steve Douglass, president of Campus Crusade, and Chuck Tompkins, coordinator of the John R. Mott Center at Cornell University (a part of the Christian Union’s ministry). Each of us talked about our “calling” into “full-time ministry” in Christian organizations. Both Chuck and I had served as parish pastors for most of our lives. Steve, after graduating from Harvard Business School, went to work for Campus Crusade, where he has served for almost four decades.
Chuck kicked off the discussion with a fifteen-minute presentation on career and calling, urging us to distinguish between the two of them. Steve talked about his decision, after graduating high in in Harvard Business School class, to join Campus Crusade (much to the chagrin of his B-School profs). I sowed eleven “seeds” that help us to discern God’s call upon our lives. My hope was that the students present, about 125 or so, might find one or more of these seeds to be relevant to their particular situation.
Today I’ll begin to summarize my eleven “seeds of discernment.” I’ll finish up the list in the following days. I labeled each “seed” with a word, so that it might be easily identified and remembered.
Eleven Seeds for Discerning God’s Call to “Ministry”
1. Laity
Yes, yes, I know this is the first name of my current ministry, Laity Lodge. But this word is essential if we’re going to talk about God’s call to ministry. Too often we use the language of calling and ministry only for what might be termed “full-time Christian service.” (Even this phrase has problems, as I’ll point out later.) In popular Christian paralance, once can be “called” to “ministry” if it’s in the church, on the mission field, or in some sort of obviously Christian parachurch ministry. But this language is inconsistent with the biblical vision, in which all Christians are called into Christ’s service. The laity (non-clergy) are just as much called by God as the clergy.
The fact that one can be called to ministry and not enter church or parachurch work is both freeing and potentially confusing. In one has a simple view of calling, in which only ordained ministers are called, then if one feels a call to go into ministry, the path is fairly clear and simple: Go to seminary and get ordained. But if one can be a minister in all avenues of life, as a banker or a teacher or a manager, then it may be more difficult to discern what sort of ministry God is calling one into.
Nevertheless, it’s essential that any conversation about “ministry” as a career recognize that calling relates to a broad spectrum of options. In the apt phrase of Laity Lodge’s founder, Howard E. Butt Jr., there is indeed a “high calling of our daily work.”
So, then, if calling pertains to a wide range of options, how can one know if he or she is being called into parish ministry, or parachurch ministry, or missions? This leads to rest of the items on my list of “seeds” for discerning God’s call.
2. Surprise
God’s specific will is often surprising. He often leads us into avenues of service that we did not anticipate. Consider, for example, Moses’s call to deliver Israel from Egypt, or David’s call to be king, or Paul’s call to be the apostle the Gentiles. This has been the story of my life:

So, there you go. God has continually surprised me in my life, calling me to ministries that I never anticipated. I suppose one might say that I wouldn’t be so surprised if I did a better job discerning God’s will in the first place. I agree. But I think most of us, if we are open to the Lord, will find that he surprises us over and over again as he directs our lives and ministries.
Tomorrow I’ll add more items to my list of “seeds” of discernment. 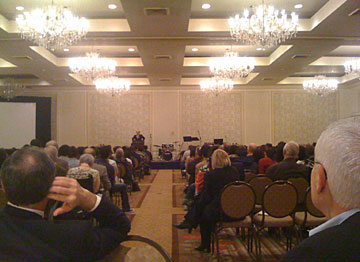