One of the things I most enjoy about traveling in foreign countries is being exposed to different languages. During my days as a student I actually studied seven languages. Yes, seven: Spanish, French, German, Greek, Hebrew, Aramaic, and Latin. All of these except Spanish were required for my doctoral program. Now let me hasten to add that I’ve never been fluent in any foreign language. I was expected to read them, not to speak them. Moreover, I did not take modern Greek or modern Hebrew. So my knowledge of other languages is rather limited and skewed.

Nevertheless, I love learning about languages and trying to figure out how they work and what words mean. During our recent trip to Europe, I had an especially good time doing this while in Greece. Though I can’t speak modern Greek, my knowledge of ancient Greek helps me to figure out the meanings of many modern words. 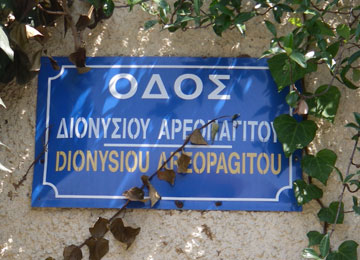 Of course some of the modern words are the same as the older ones. For example, all of Athens you’ll see signs that have the word ODOS. This means “road” or “street.” Curiously, it is the word used in Acts of the Apostles to name the early Christian movement. Usually odos (which we pronounce ‘hodos’) is translated as “Way.” The early Christians were part of a movement called “The Way.” But, today, odos simply means “street.” 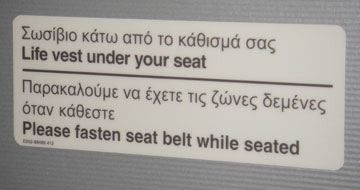 We flew from Frankfurt to Athens on Aegean Airlines. The signs in the plane were in Greek and English. I was fascinated to note that the word for life vest is sosibio (or sosivio as it’s usually transliterated today). This is clearly a combination of two words I know from ancient Greek. Sos is the root of the salvation words, including “to save” (sozo) and “salvation” (soteria). Bio was and still is one of the Greek words for “life.” It’s related, of course, to our word “biology.” So, in Greek, a life vest is, literally a “life saver.” Makes sense, doesn’t it? 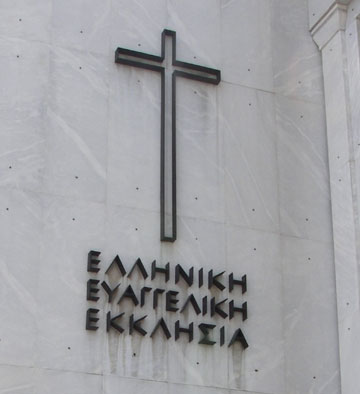 The vast majority of the churches in Athens are, you guessed it, Greek Orthodox. No surprise here. But I did see a sign on one church that rather surprised me. It read: ELLENIKH EVAGGELIKH EKKLESIA. The meaning was obvious: “Greek Evangelical Church.” Sure enough, this church was one of the rare exceptions to the Greek Orthodox rule. I don’t know much about evangelical church life in Athens, and this particular church wasn’t open. But it was fun to find such a church and to be able to decode the meaning of the sign.
read next post