Why Having Three Kids Makes Me Feel Macho 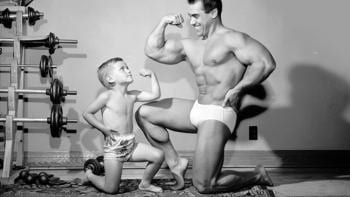 A few months ago, my wife and I attended a birthday party at a nearby reservoir. In addition to our two big kids (Josie, age 7, and Judah, age 5) we brought along our new addition Rosalie, who was then about four months old.

The folks at this party were like us in almost every way: semi-prosperous suburban folk with degrees from good schools, small, cluttered homes and fuel-efficient cars. What set us apart was that we had dared to have a third child.

And thus every couple at that party greeted us in the exact same way. The women asked to hold the baby, then looked at their husbands with a doomed animal longing. The men regarded me with a mixture of pity and awe. “No more man-to-man,” they all said. “You’re going to have to play zone.”

Until you have faced three vomiting children at two in the morning, you have no idea what true machismo is.

This was true. I spent most of the party making sure neither of my bigs drowned in that brown, soupy reservoir. Toward the end of the affair, Erin needed to take Josie to the bathroom and asked me to keep an eye on Judah and change the baby’s diaper. This was a bit more complicated than it sounds because the cupcakes had come out and Judah, like any sensible five-year-old, wanted to consume eight of them.

Even as I squatted and spread out the portable changing pad and pulled off Rosalie’s diaper, I could see that Judah was reaching for another cupcake. I called out for him to cease and desist, then fixed him with my best don’t-mess-with-daddy-on-this squint. By the time I turned my attention back to Rosalie her face was flushed and her tiny mouth was producing pitched grunts. In the space of half a second, I plucked a fresh diaper from the pack and pressed it against her tush, just managing to stanch an explosive bowel movement. A small phalanx of dads had witnessed this and one of them, speaking for the group, said, in a reverent tone, “Nice save, dude.”

This may not sound very badass to the child-free dudes who are reading this right now. Your idea of machismo probably still involves bedding hotties or kicking someone’s ass in a bar fight or climbing Mount Everest in Crocs.

But until you have faced three vomiting children at two in the morning, or attempted to insert suppositories into your panic-stricken three-year-old while holding her writhing one-year-old brother in your arms, or had to calm a child so deeply committed to his tantrum that he is literally choking on his tears—until then, you have no fucking clue what true machismo is.

I know this is a deeply bigoted statement, one that it fails to recognize numerous valid forms of masculine heroism.

Here’s the other great unspoken truth about parenting: You’re constantly failing in ways small and large.

Because here’s the thing: there’s no training program for having a child, let alone three of them. There’s no workout plan. There’s no special diet. There’s no therapeutic regimen. And most important: there’s no negotiating with children or your solemn duties toward them.

From the moment they appear in your life, you are charged with keeping them safe — safe from physical danger and from fear and sorrow and all the other big-ticket monsters lurking in the closets of this world. As an added bonus, you have to make sure they don’t grow up into bullies or drug addicts or reality television stars.

You try doing that sometime, pal, then tell me how intense your Mixed Martial Arts session was.

I should make clear at this point that I did not have kids to prove how macho I am. I had them because parenthood is one of the great gifts of being alive, the purest chance we ever get to transmit our love to others. Also, I very much enjoying having sex with my wife.

In fact, while the first two children were somewhat carefully planned, Rosalie was more like a special bonus child.

Now that she’s a part of our family, we couldn’t imagine life without her. But it’s worth noting that both of us, upon learning of pregnancy number three, spent a good deal of time weeping.

Why? Because we knew how hard it had been to take care of two children, how tired we were all the time, how precarious our finances were, how much our patience had frayed and how much our lower backs throbbed by the end of the day.

We knew, in other words, that our lives were about to get much happier and much harder. And so it has come to pass.

Our standards of machismo in this country are so utterly warped. We think it’s about how hard you can push your body or individual will.

It will go without saying (though it will be said) that my wife works about ten times as hard as I do when it comes to the kids. She’s the one up at night with the baby, the one who packs the lunches and gets the bigs off to school. She does all the laundry and the boring paperwork and most of the cleaning.

I’m responsible for a much smaller share of the workload: bringing in the dough, throwing the kids on the couch over and over again, that kind of thing.

And yet, to reduce parenting to a set of domestic duties is to overlook the most grueling work, which is mostly emotional and psychic.

Because here’s the other great unspoken truth about parenting: You’re constantly failing in ways small and large. You choose the wrong battles and lose your temper and set rotten examples. Whatever weakness and doubt and rage lurk in your soul, your children will squeeze it out of you. This is nothing personal. They’re just doing their job.

Again: I know it sounds silly for me to claim fatherhood as the ultimate form of machismo. But that’s only because our standards of machismo in this country are so utterly warped. We think it’s about how hard you can push your body or individual will.

But it’s much tougher to face the limits of your own heart, to sacrifice your will to the (often irrational) needs of another, to love your children not just when they’re cute and cuddly, but when they’re enraged and irrational and unlovable. 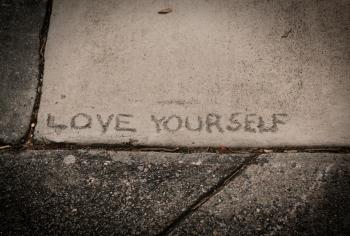 Tips for Raising Your Self Esteem: It's Between You and You
archives most recent
More from Beliefnet and our partners
previous posts

There is an old Rastafarian mantra that goes like this: “A man without hair is like a tree without leaves.” Just to be clear, I’m not a Rastafarian nor do I plan on growing dreadlocks, but I have been playing around with growing a long hair style and this particular quote seemed appropriate. Ever since […]

In these troubled COVID times, a man must do everything he can to keep his job lest he end up just another depressing statistic/exemplary member of a vibrant homeless community. According to a recent TimelyMD survey regarding the impact of COVID-19, that an overwhelming majority of men are experiencing increased stress and/or anxiety during COVID-19. Given […]

10 Tips For Dating After Divorce With Children

Why Having Three Kids Makes Me Feel Macho

A few months ago, my wife and I attended a birthday party at a nearby reservoir. In addition to our two big kids (Josie, age 7, and Judah, age 5) we brought along our new addition Rosalie, who was then about four months old. The folks at this party were like us in almost every […]